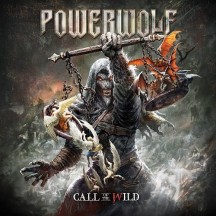 
Sunday means going to church. Call Of The Wild marks the return of the German vampire werewolves who worship the unholy cross by drinking the blood of innocents. It is almost hard to believe that it has been four years since the triumphant The Sacrament Of Sin; perhaps because I am drawn to listening to any of Powerwolf's albums at the drop of a hat.

Consistency has always been dear to this band. You know what to expect with Attila Dorn's operatic vocals, Falk Maria Schlegel's organ-sounding keyboards, and the pack of Greywolves backed by a grand choir. You could stitch random songs from their previous albums and end up with a sonic quilt that would pretty much be Call Of The Wild. There is some Latin lyrics here and there, a bit of German, plenty of classic power metal and most track names seem randomly generated. Powerwolf's imagery has long been cemented into our psyche and the same is true for their sound. It is to the point where I cannot tell which album I am listening to. Well, does it really matter? No, and that is becoming a little bit of a problem for the band. The formula still works very well but it is starting to wear thin in the grand scheme of things. However, if you need your Powerwolf fix, Call Of The Wild delivers the goods.

Right from the get-go, "Faster Than The Flame" does sound like most of their successful tunes. And while "Beast Of Gévaudan" has an ambitious structure, and a fitting story line, it is keeping the wolfish flame alive. After that, it is the usual unfolding of pop influenced catchy numbers such as "Dancing With The Dead" and the title track. There are some folk music influenced numbers such as "Varcolac" and "Blood For Blood". The mandatory heavy metal power ballad a la Manowar "Alive Or Undead" stands out without truly surprising. "Sermon Of Swords" has that perfect Judas Priest fanboy atmosphere. A couple of songs could be part of the Ghost ghoulish catalog, including "Reverent Of Rats", which ends the listening experience on a high.

Now, part of the fun resides on the deluxe edition. There is a special bonus album, a collection of Powerwolf's best anthems that include a different guest singer alongside Attila for each track. And if you pay a little attention, the guest singers and songs have been cleverly paired. With guests such as Alissa White-Gluz [Arch Enemy], Johan Hegg [Amon Amarth], Björn Strid [Soilwork], and Johannes Eckerström [Avatar], I had never heard so many growls on their music before. It is refreshing. We are also treated to more classic clean power metal vocals with the inclusion of - among others - Ralf Scheepers [Primal Fear], Matt Heafy [Trivium], Jari Mäenpää [Wintersun] and the iconic Doro Pesch. This bonus album could easily stand on its own, and will probably be on rotation for years to come. There is even a third album that consists of the orchestral versions of the main album, which highlights the huge amount of work that is being done by the expanded choir.

Call Of The Wild is the rightful heir to The Sacrament of Sin. Look, it's Powerwolf. There are no surprises. It is well done. It is catchy. It is like you just ordered the same items from the takeaway menu from one of your favorites restaurants for the umpteenth time, and yet it's perfectly delicious and just what you needed to make your day. Then you realize you got free dessert with the bonus albums. So, have at it. Feast.

Written on 18.07.2021 by
Dream Taster
Bringing you reviews of quality music and interesting questions such as: