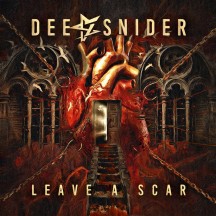 Having proved his doubters wrong with For The Love Of Metal by producing a solid an enjoyable record, while also giving fans his best solo work to date, Leave A Scar is more of a step in the wrong direction than it is building on the solid foundations Dee Snider laid down three years prior. Taking the "if it ain't broke, don't fix it" approach, Leave A Scar offers more of that winning formula once again by combining one of the strongest voices in hard rock with modern metal. This should provide a working formula, on paper, but something got lost in application and it doesn't work so well this time around.

While it doesn't live up to expectations, there is at least a good deal to enjoy on this record, the primary source being Dee Snider's voice which is still as solid as it was back in his Twisted Sister glory days and turns out to be one of the consistent highlights throughout the album. The faster, more hard-hitting tracks "All Or Nothing" and "Time To Choose", as well as the slower, more spacious "Before I Go" are all solid vehicles for Dee Snider's vocals.

The moments when the music combines with Dee Snider and holds its own is where the album truly excels. Setting the bar early are "Down But Never Out" and "Before I Go" that will make you think the album peaks early, before hitting you later on with the thrash inspired "The Reckoning" which blows every track before it out of the water. Leave A Scar does, at the very least, have two points of ascension to hang its hat on.

The main weakness for much of Leave A Scar is in the song writing. While it doesn't stray from what worked before, something here just doesn't click properly, and as a result you can feel the gas pouring out and hear the igniter sparking while seeing nothing that really catches flames like it threatens to do. Tracks like "Time To Choose" and "Silent Battles" lack that hook or riff to really kick the song into gear and have you hold on for dear life. Instead you find yourself sitting with cruise control waiting for something exciting to happen.

While there is no doubting the pedigree and prowess of anyone involved in Dee Snider strong supporting cast, they are unable to provide him the bow to his arrow. "In For The Kill" is perhaps the best summation of this. The song has laser precision accuracy at its target, but something goes wrong in the execution, making the song fall far short of the target. If he is indeed going for the kill, you are fortunate, as the most damage this song leaves is a light bruise.

Leave A Scar is ultimately an album that falls short of expectations rather than a bad album, and one that will have you neither reach to turn it off nor to crank it up while on an adrenaline fuelled rush. While it's good to see Dee Snider back and trying to outdo himself, it's a shame to have to say he doesn't do himself justice here.

Written on 24.07.2021 by
omne metallum
Just because I don't care doesn't mean I'm not listening.
More reviews by omne metallum ››