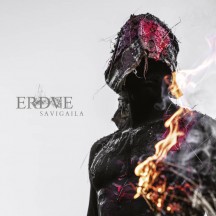 
Savigaila translates to 'self-pity' (just like that, you're on your way to learning Lithuanian); self-pity is a somewhat ugly emotion, and Savigaila matches that with its music.

Erdve came out of the blocks in style on their 2018 debut, Vaitojimas ('shout' or 'moan', you're practically fluent by now), filled with thick, pounding black-tinged sludge riffs. Released on Season Of Mist without any prior releases from the band or any well-known previous projects that its members were involved in, it was an album that justified the implied hype that comes from a band with that little history debuting on such an established label. On their follow-up, Erdve have become an even more abrasive prospect, but it may not entirely be for the better.

Vaitojimas wasn't a happy album, with a dissonant thunder to the brooding, suffocating riffs. However, Erdve were more of a sludge-heavy post-metal band on their debut, with the songs mostly slow and featuring contrasts of quiet lulls with the force of the lumbering sonic climaxes. Right from the off, Savigaila announces a departure from this with the blistering hardcore assault of "Lavondėmės": frenetic blasts, hardcore barks and dissonant, pulverizing riffs abound. This opening song is far more aggressive, abrasive and ugly than anything on Vaitojimas, and there's more of that punishing hardcore on the likes of "Betonas" and "Bendrystė".

The brooding, trudging side of Erdve isn't completely absent on Savigaila; the likes of "Smala", the second half of the title track and the closer "Takoskyra" feature some grim pounding riffs. However, that which once characterized the band's sound feels like a minor component on this new album. There's arguably more time dedicated to the different interludes on Savigaila, whether it be the ominous instrumental "Votis" or the muted piano piece "Skilimas". Additionally, even the sludgier parts feel more hardcore-oriented than the blackened post-metal feel of the same sections on their debut.

The question this naturally raises is: is Savigaila better for this switch from sludgy post-metal to sludgy hardcore? Ultimately, it will come down to musical preferences. This new album is a powerful, oppressive, abrasive listen that hits listeners with both full-blast attacks and pounding stomps, all of which is great for a hardcore album. It's also more varied than Vaitojimas, both because of the increased focus on hardcore and also because of the instrumentals scattered across it. However, whether it's just because of my expectations coming into the album or because of the actual content of the record, I'm not sure, but I do feel slightly unsatisfied by Savigaila. It feels like a bit of a shame to show oneself to be so adept at writing songs that are bruising and malevolent, but also groovy and atmospheric, just to immediately shift towards prioritizing the vicious, abrasive harshness that much more over the rest. Ultimately, I can respect the grim savagery of the likes of "Lavondėmės", but the outstanding quality of songs such as the title track that do combine both the hardcore and sludge elements together only serve to highlight that which has otherwise been lost on Savigaila. Still, if you liked Vaitojimas but wished for Erdve to up the ante and take that album's sound in a more punishing direction, Savigaila might be just what you're looking for.

Written on 26.07.2021 by
musclassia
Hey chief let's talk why not
More reviews by musclassia ››