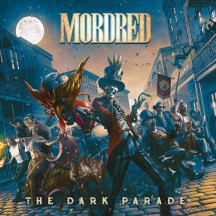 
Marching out of time.

Anyone remember that episode of The Simpsons when Homer goes to Lollapalooza and laments how no one remembers the classic rock bands of his youth? Well, replace those names with the likes of Electric Love Hogs and Mind Funk and you will likely elicit the same bemused response when the genre of funk metal is brought up. Pioneers of perhaps one of the most left field sub-genres around, funk thrash, Mordred unfortunately never got their dues before they faded into obscurity. Returning in 2021 with their first release in nearly thirty years, the band are back from the dead once more.

Unfortunately, those of you rushing to hear what funk thrash sounds like won't be satiated here; Mordred offer up the latter, but do so in combination with the alternative metal sound they produced later in their career (check out In This Life if you are fan of this sound) instead of with funk. While this doesn't mean The Dark Parade is a bad album, it does mean fans of the band's earlier work will find the wait hasn't panned out the way you would want it to.

Starting off on a very strong foot, "Demonic #7" is a great way to not only reintroduce fans of the band, feeling both familiar and fresh in equal measure, but also to introduce those unfamiliar with the band and their wares. While the album doesn't hit the heights you may hope for, it does reach an admirable altitude that will draw a few eyeballs their way, courtesy of tracks like "Malignancy", "All Eyes On The Prize" and "Dented Lives" pushing the album into orbit.

Like getting your third-choice Christmas gift, the band's alternative offerings are still enjoyable, if not exactly what you asked for. The title track and "Dragging For Bodies" are hypnotic and captivating in their own ways and offer up something unique (with sole new member Gomes showing off his skills behind the drum kit).

The album is well produced, with the album having an overarching menacing atmosphere that overhangs each track without impeding or bleeding into any of the songs. "Dragging For Bodies" in particular has a subtle though penetrating creepy atmosphere courtesy of Vaughn's keyboards that make the track what it is. Unfortunately, Vaughn's work is a two-edged sword here as it is for much of the record, with the other hat he wears being that of turntable player. On the aforementioned track, they are way too high up in the mix and briefly and sharply take you out of the song while adding nothing.

Many of the shortcomings with The Dark Parade are in what it doesn't do rather than what it does; the lack of a Liboon bass line that sounds like a Funkadelic song but pumped up on bath salts and energy drinks is a regrettable absence. Holderby never sounds excited in his vocals and with the exception of the chorus of "Malignancy", he doesn't add anything to the sonic groundwork the band have crafted for him; if he were to grab a song by the horns once in a while then he could add something. The biggest missing piece of the album is that of a killer hook or riff to hang a track off of. As enjoyable as the tracks are, they all feel as if they are just one or two jigasaw pieces short of a complete puzzle; though you can make out the picture, that missing piece will frustrate you and leave things feeling incomplete.

While thoroughly enjoyable, The Dark Parade is like a Disney parade without Micky Mouse: plenty of fun to be had and plenty to occupy the senses, but missing that key ingredient to really make it what it should be. Mordred establish a strong foothold for themselves moving forward and plenty of forward momentum, but hopefully they return to the funk thrash sound of yore at some point.

Written on 27.07.2021 by
omne metallum
Just because I don't care doesn't mean I'm not listening.
More reviews by omne metallum ››