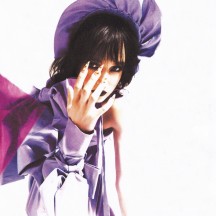 
After how well it worked with I Disagree, I think I'm going to make a habit out of ignoring relevant background information about Poppy when I review her releases. Today, I'll be ignoring "NXT" and stopping myself from wondering what it is and why it has a soundtrack. I'm just going to talk about jams.

I Disagree brought Poppy, a strange internet person, to the attention of heavy music knuckle-draggers by reviving nu metal and slapping a Hot Topic-core candy coating over it to make it as sickeningly accessible as possible ("acerbic moody-teenager pop with some drop-C riffs underneath," as I put it previously). Thinking about it, this was a strange thing to do. Sometimes I forget that Metal Storm, even with the number of horrified onlookers a release like this invariably attracts, is still something of an esoteric echo chamber where we have absolute freaks like Radu and Che reviewing unholy concoctions on the front page and flying way too close to the experimental sun; I have absolutely no idea how the metal world as a whole reacted to Poppy, if they even recognized her as something to react to (I hope their dentures fell out and stained their Mötley Crüe t-shirts). Even I'm still not sold to the degree that I am on Babymetal - but Poppy seemed to have swept into a corner of the American market lacking a monarch, and she fit the description pretty darn well on that album. She followed that up with the noise EP Music To Scream To, and though I appreciated that as a concept more than as a recording, Poppy was satisfied enough with her cross over into heavy music that she kept it going (with a whole new skin) for another EP.

Eat, like the two records preceding it, takes a different approach to heaviness, though this one, too, has some recognizable precedents: millennial-riot-grrl-screamo that I remember from Porcelain And The Tramps and fleeting images of neon-purple MySpace profiles (my mind is basically a mess trying to process, enjoy, and describe this music simultaneously). Zinging electrodes and scraping feedback trip into weirdly hooky pop-punk choruses covered over by sheet metal, as if the bubblegum and bilious elements of I Disagree executed a marvelous heel-turn and crashed head-on into each other. Eat's five tracks are more sonically uniform, but a similar degree of variety can be discerned in the EP as a whole; rather than a box of chocolates, this release is a layer cake, a fuzz-bloated nu-industrial metalcore scream machine in which groovy Soulfly riffs slam into howling breakaways wholly lacking in the advised parental supervision. Poppy's harsh vocal techniques are driving her closer and closer to true hardcore abandon, hammering a wider and wider gulf between her heaviest spasms and the benign lullabies composed of random Japanese fragments and lilting whimsy.

Maybe it's her courtship with Ghostemane, maybe it's the need to channel a year's worth of "dark dark world" energy, or maybe it's Poppy being legitimately satisfied with the unaccountable success of her incursion into increasingly brutal spheres, but Eat seems to suggest that Poppy has a great deal of further experimentation to embark on within the broad sphere of raw, angry, throat-scratching aural unhappiness. Eat is shorter, simpler, and altogether more conventional than I Disagree, so if you were scandalized by the album, there's no reason to think that you'll be similarly affronted by this EP; if you can kick back to some female-fronted hardcore and dig a little rhythm in your choruses, you'll be fine. If you did happen to enjoy I Disagree, though, you should still be satisfied with this mutation. Even after a few spins, I could eat a little more.