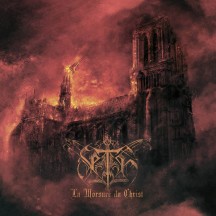 
It's French black metal. What more do you want?

Seth's origins are entrenched and entwined in Season Of Mist's, signifying, in a sense, a roundabout return to form that accentuates bullet belts and leather vests as much as pristine production and philosophically charged ideologies. And while Les Blessures De L'âme deserves its own contextualized appreciation for its cult following and underground impact, La Morsure Du Christ further establishes the band's significance as they look to carve out a particular niche in black metal's storied history with a grandiose performance harkening back to the earliest renditions of the genre -- a history they helped develop.

But this isn't a project limited to being relegated to the past. This is a band rejuvenated and refreshed, and there are plenty of worthy headlines to capture the ire of a group of anti-Christian misanthropists to derive lyrical inspiration from.

Anyone even passively familiar with the Notre-Dame de Paris incident in 2019 where the iconic cathedral became engulfed in flames will either scorn this album's cover art or support it for highlighting the downfall of a religious institution. For a band like Seth, it shouldn't come as much of a surprise that the music therein is an emerging force straight out of the mid- to late-'90s, only modernized. The bombastic and unrelenting nature carries with it the pent-up rage induced by nearly a decade of silence, delivered efficiently in a palatable 44-minute duration. It's a structurally sound and thoughtful album all around, with a pinpoint mix and organic feel despite the heavy synth usage, and the natural storytelling flow within each track highlights the chemistry of this revamped line-up. Not a moment goes to waste.

Newly appointed vocalist Saint Vincent's ferocity cuts through the music like a knife with his raspy shrieks and growls, bringing a different dynamic to the band's sound compared to Black Messiah's somewhat deeper pitched approach. His intensity is matched equally by the rest of the unexpectedly cohesive supporting cast, firing on all cylinders with a newfound sense of confidence and maturity only hinted at in The Howling Spirit, which tended to borrow too much from others as opposed to serving as a vehicle of creation for their own unique product. La Morsure Du Christ couldn't be more Seth if it tried.