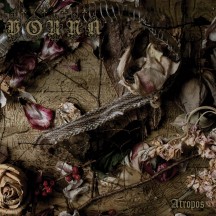 
Greeks do it better. And I am not biased.

'Atropos' in mythology is one of the Greek Moirai (Fates); Clotho spun the thread of human fate, Lachesis dispensed it, and Atropos cut the thread and thus determined each mortal's moment of death. The Washington-based Yianna Bekris is a Greek composer and multi-instumentalist and Atropos is her project Vouna's second full-length album. Yianna says that she gave this name to the album to represent the inevitability of mortality, as well as her own deep reflection on the subject during its creation. And you guessed it right; it is doom metal.

In fact, it is funeral doom metal with elements of atmospheric black metal / blackgaze and ethereal goth. The use of synths is heavy but not as heavy as on the debut, since this album is more guitar-focused. The music and ambiance gives me a sense of marriage between Skepticism and My Dying Bride. The vocals are mostly clean and Yianna's voice is nothing short of angelic. Her higher register is incredible, as it is manifested in the beginning of "Highest Mountain" and the ending of "Grey Sky" (the last two and a half minutes of the latter make for some of the most captivating music of the year). There are also harsh vocals that are used for the - scarce - more 'aggressive' parts and I have put the word 'aggressive' in inverted commas because this album doesn't come across as crushing or oppressive. It is melancholic, melodic, lush, soothing, gloomy, dreary, and bleak; but not aggressive. Yianna Bekris said about it: "Without really intending to, the album became a tapestry of the emotions I have encountered myself or observed in others when faced with death". I think Atropos conveys the inevitability of death but not as being something horrific. It embraces the feeling you get when you reach the final page of a fine book; you are sad that it's over but you also feel lucky to have had the opportunity to read it.

Yianna loves mountains ('vouna' means 'mountains' in Greek) and she makes it very clear from the opening track, "Highest Mountain", which is about someone who is close to dying and whose final wish is to be buried at the peak of the highest mountain. The song begins with the beautiful notes of the harp - played by Asia Kindred Moore - and then treads on doomy landscapes, encountering some black metal blastbeats on the way. "Vanish" features the heaviest sections on the album what with its devastating death doom passages, enhanced with Nathan Weaver's (Wolves In The Throne Room) roars. The blastbeats on the last two tracks of the album are riding on a blackgaze cloud and the extended use of synths on these gives them a very cinematic character.

I have very little criticism for Atropos. I immensely enjoyed the album as a whole but some trimming would have arguably made it even better; three tracks here are around the 15-minute mark and there is an interlude / song reprise whose inclusion doesn't offer anything of great importance. However, I believe that this funeral doom record may very well please even metalheads that mostly detest funeral doom for sounding too repetitive and uneventful. The pace of this album is trudging but never monotonous and each song feels like it is moving forward; very slowly, but moving forward nonetheless. The songwriting is surprisingly interesting for the style with different (and unrepeated) sections in each song, even though some transitions may come across as being a little abrupt. In any case, this is one of the very few instances that a funeral doom release has enough things going on to keep the listener engaged and doesn't rely solely on atmosphere.

Finally, it is impressive how meticulously this album seems to have been created. Not just the music, but also the band logo, the album title, the cover art, the production... everything is so well made. The sound is rich and enveloping and this is to be expected since it was recorded at Wolves In The Throne Room's Owl Lodge studio, mixed by Esoteric's Greg Chandler and mastered by Cruciamentum's Dan Lowndes. I admit not knowing about Vouna before this album and it came as a surprise for me; listening to it gives me a sense of fulfilment that only music can give. Atropos is an exceptional music record.

"Leave behind the sorrow..."