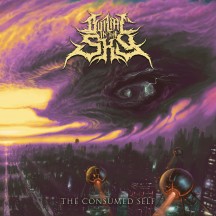 
It was about time for these saxophone tech death lads to finally live up to their potential.

You may remember my review of Burial In The Sky's previous record, 2018's Creatio Et Hominus, and me calling it disjointed and messy despite giving it a 7. Just in case you were wondering why I don't rate stuff anymore. But despite being a pretty decent tech death record, what really lead me to grow fond of Burial In The Sky was their use of saxophone, coincidentally the same saxophonist that guested on Rivers Of Nihil's Where Owls Know My Name, an album I reviewed and that me and others praised for said use of saxophone. And all the talk of saxophone has made it seem like it's a bigger deal than it is and in the meantime it began to feel a bit too much like a gimmick, but I retained the hope that Burial In The Sky could really do something great. They did.

The personnel on this record is pretty huge. First things first, vocalist Jorel Hart, who seemed to have been more of a session vocalist on Creatio Et Hominus, is now a full-time member, and the band is also joined by a second guitarist in Brad Hettinger. And even if the five members perform on eclectic instruments as the aforementioned saxophone, as well as mandolin and accordion, one look on the Bandcamp page showcases a list of twelve guest musicians performing everything from spoken word to trombone to theremin to French horn to whatever the hell a "euphonium" is. And just like the previous record, which had a concept based on the subjectivity of experience, this one has a dystopian concept about a society that is walled in and fed propaganda about the outside world. So: experimental instrumentation and a neat concept, thus pretty much everything that was already good about Creatio Et Hominus.

Now what was bad about Creatio Et Hominus was that the songwriting felt disjointed and half-baked. Yeah, that's pretty much not the case here. Everything from the performances to the songwriting to the production quality seems viscerally more muscular than they were three years ago. The riffing is more dynamic, the vocals more varied, the sax has more and better-integrated moments, the drumming is pretty thunderous, and the production is as pristine and atmospheric as one can come to expect from this kind of progressive tech death. And the songwriting really puts the necessary emphasis on the "progressive" rather than the "tech" part, even if the latter is not dismissed. Though I probably wouldn't have guessed that many guests were involved, with their contributions veiled quite subtly, it does give the record a bit of a symphonic edge that is not overt enough to be cheesy.