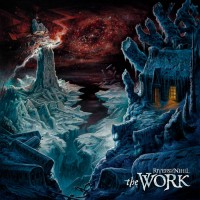 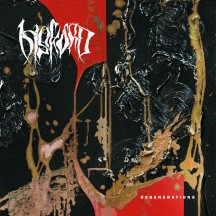 
It's been nearly a decade since the last Diskord album, and that decade still hasn't been able to untangle Diskord's music.

It is a bit difficult calling Diskord death metal. Even if all the namedropping bands are still in the death metal sphere, like Demilich, Gorguts, Carbonized, and Atheist, there's something transcendental about Diskord's music where it feels like the technical death metal basis has been twisted beyond its mere form where it can still safely be called that. Each of the bands mentioned were forward thinking for their time, so calling them avant-garde is justified. Diskord have been at it since 1999, putting out their first record in 2007, so they were around for quite a while. But even now, in 2021, it feels ahead of the curveball.

It's not like 2021 hasn't had it's share of forward-thinking technical/progressive death metal, with names like Mefitis, Ad Nauseam, Atvm, Seputus and StarGazer all pushing the envelope in their own way. And it's perhaps telling how half of those have a very old-school 90s feeling about them, showing how much they were influenced by the bands I mentioned previously. So with such a long history and a staying power to forward-thinking death metal, what exactly makes it forward-thinking anymore? If all bands sounded like Gorguts, would that sound be forward-thinking anymore? If Degenerations were to sound exactly like Dystopics, would it be worth calling it avant-garde?

Reading our review of Dystopics, it really feels like it could perfectly be used to describe Degenerations as well, because the review focuses mostly on the sound as a whole instead of album specifics. Nine years later, Diskord still play mind-cluttering music, throwing oddball bursts of riffs, free-floating bass, incomprehensible drumming, structure changes that feel ad hoc, psychedelia old school production. All of these have been part of the sound of a bunch of other similar bands, but somehow none of them manage to sound as mind-boggling as Diskord. Somehow all of it transcends what I can assume are the borders of death metal. This feels closer to something else than to straight-forward death metal, regardless of how many riffs and growls it encapsulates.

And despite how it technically has a lot in common with a lot of the aforementioned, listening to Diskord still extinguished most of the familiarity into a unique listening experience. The organic production makes this less suffocating than a lot of the free-flowing tech death of nowadays, with its pummeling sense being more of an oddball one. It manages to be both dissonant and groovy, both nauseating and riveting. It's all somehow... penetrable? It's avant-garde technical death metal done in a way that is inviting. Which might explain why it's exhilarating to listen to this and not feel much of the fatigue I generally associate with music of the sorts.

I am now fully warped and my mind is inside out.

Written on 27.08.2021 by
RaduP
Doesn't matter that much to me if you agree with me, as long as you checked the album out.
More reviews by RaduP ››