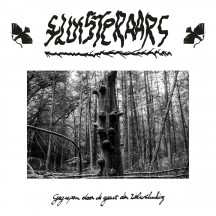 
Though not necessarily as striking as Bloem's field of flowers, Gegrepen Door de Geest der Zielsontluiking

It's quite impossible to take Gegrepen [...] on its own terms without comparing it in some way to the revelation that was last year's Bloem. Fluisteraars is a duo that has been around for quite a while (even though they started out as a trio) and has been making music for more than a decade, and while Dromers and Luwte are fantastic black metal albums in their own rights, I didn't really feel like I was blown away until I heard Bloem, an album that seemed to loveably subvert black metal into a sundrenched psychedelic triumphant and hazy field of flowers. And if that sounds completely bonkers and offensive to everything black metal should stand for, that's only because I'm exaggerating this perspective. Bloem was an album that was clearly black metal proper that got warmer and warmer until you realized that the nature it inspires is less a wintery forest but the tulip field in the cover art.

It seems like Fluisteraars like to release their full lengths in pairs one year apart, since their previous releases came in 2014, 2015 and 2020, thus I expect the next one in 2026. Gegrepen [...] is not only interesting in that it comes so close after Bloem, but that it seems to work because of it. I already came in curious to see how that warm unique approach on psych/gaze would develop, and I don't think Gegrepen [...] would've had as big of an immediate impact if I had heard this one first. Here that approach is somewhat more consistent, but just like the cover art, it's less striking. The brass sections are more subtle, the guitars themselves seem to be more indirect, the band claims that no keyboards were used on the record (which makes me a bit baffled as to how some atmospheric sections were handled), and the whole thing has more of jammy vibe.

So, it seems like Bloem was more experimental and this one is more focused on what worked from that experiment. With a title that translates to "Gripped by the spirit of soul blossoming" or something like that, the album has a pretty primitive and slightly improvisational vibe to it, which makes sense considering the recording process was more of a "one-take" one. Coupled with mastering by Greg Chandler, this album does sound fantastic, and it's clear that the band is playing to some of their strengths here, mostly production and performance-wise. It seems like they're even ambitious enough to make their longest song yet in the 20 minute long "Verscheuring in de schemering". As far as the performance goes, B. Mollema continues to have some blood-curdling shrieks that completely contrast the warm feelings of the record, and though M. Koops is entirely capable when performing every other instrument, him being mainly a drummer (also playing in Iskandr, Nusquama, and Solar Temple) clearly shows in how disproportionately impressive his drum playing is.

I could say that I have mixed feelings about Gegrepen [...], but they mostly mix into this: Gegrepen Door de Geest der Zielsontluiking is not Bloem, but it perfectly builds on it.

Written on 01.09.2021 by
RaduP
Doesn't matter that much to me if you agree with me, as long as you checked the album out.
More reviews by RaduP ››