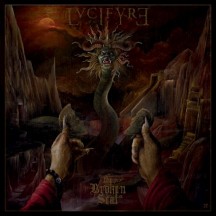 A decade on from their debut and two years on from their last release, Lvcifyre return with their third full-length album in 2021's The Broken Seal. To say that they have made their fans wait for it is an understatement, but the band do make good on lost time by producing a strong record that will make the wait worth it.

Long a band who have been blessed and cursed with the 'hidden gem' moniker, Lvcifyre have bubbled away under the surface for a long time and take things to the next level. Anyone wanting to dive deeper into the genre will find a good solid chunk of music to add to their list of things to listen to, with The Broken Seal likely to be on regular rotation.

Where The Broken Seal hits its stride is where it tempers its extremity in the name of atmosphere and groove, with "The Fall Of Archon" and "Tribe Of Khem" fitting into that sweet spot that allows the song to breathe yet imposes such a heavy atmosphere that drawing anything beyond agonal gasps is hard. The title track follows much in the same vein but is just the other side of the extremity/atmosphere balance, which gives the record much-needed variation without sacrificing quality.

Nevertheless, if you want some straight-up heaviness, then the album has that in stock too, with "Black Beneath The Sun" enough to satiate those who want to pummel their ear drums and annoy their neighbours in equal measure, ably assisted by the machine gun drumming of Menthor, whose drums are pushed high in the mix and given such a sharp and heavy tone that they power proceedings forwards like being shot out of a cannon.

The Broken Seal does suffer from much the same drawback that befalls many a black metal album, that is that it does struggle in the production department in translating everything to record. For as crisp and clear as songs like "Black Mass" are, they are that bit more refined and lacking that cutting edge that can make or break a black metal album. The decision to play loud and use the sonic distortion to create audible chaos such as on the aforementioned track does become very samey after awhile. The enjoyment you will get out of this album will vary on whether you prefer more audio anarchy or arranged armageddon.

While he is a solid vocalist, I did find Kaos' vocals left me wanting on several occasions throughout the album, with tracks like "The Wolf Of The Great Dark" sounding like they were an afterthought, which often brings you out of the moment rather than serving to immerse you further.

In addition to breaking seals, hopefully Lvcifyre are able to break through the glass ceiling they have seemingly found themselves under. The Broken Seal has enough in its arsenal to entertain and engross fans both old and new: worth seeking out.