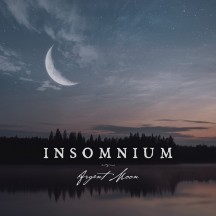 
This song must be over one and a half hour long… What? "Four track EP?" Oh, I see: though each chapter is a captivating composition with its own character, the four combine into a novella rather than an anthology. Argent Moon is more than the sum of its parts, and I've been listening for hours.

About 434 851 200 seconds ago, I was shorter, had no sense of fashion, yet am still somehow wearing the same shirts today. Roughly 7 247 520 minutes ago, I had short hair with crimson highlights, life was easier, and I've likely cut my life shorter since then. Circa 120 792 hours ago, I didn't listen to music on my phone, but on a mp3-player device with limited storage capacity. More or less 5033 days ago, limited storage capacity mattered little to someone with a musical taste limited to a handful of bands. Around 719 weeks ago, having recently expanded my musical taste by 1000% (no, that's not how percentages work), I was excited to attend my second gig ever, having travelled to Fryshuset, Stockholm to catch Amorphis' Silent Waters tour.

One of the opening acts was Swallow The Sun, and I remember thinking they were pretty cool. It would've been funny had the other support band not been who you'd expect, considering all this build-up, but of course it was one of the bands I would later be told it is a "travesty" not having listened to. I get that a lot, but of course I have heard Insomnium (once) before (for roughly half an hour on November 29, 2007), so you got nothing on me! I have vague memories of the gig, but I'm quite sure I liked it. Fast-forward 13 years, 9 months and 11 days, and here I'm sitting asking myself what took me so long. Now, I've sampled some of their discography as reference points, and while Argent Moon is undoubtedly a metal album, there is very much an unplugged, mellow, sort of singer-songwriter vibe going on here. As the band stated, it is an EP "grow[n] in the darkness and misery of the quarantine", and focuses on their softer side.

Considering the variety of moods, creative song arrangements, and exciting shifts in dynamics they've put into only 23 minutes of music, Insomnium are clearly multi-faceted enough to remain excellent songwriters no matter the level of distortion. "The Conjurer" opens the EP with a rollercoaster ride of alternating moments of sparse, around-the-campfire acoustic strumming and subtle piano chords with ever heavier moments of melodic death metal. Near the one-minute mark, as the lead guitar chimed out a soaring, rising melody, something nowadays quite rare in music occurred: a performance truly impressed me. Niilo Sevänen's is a curious flavour of growl; not quite a guttural death rumble nor a hoarse post-hardcore scream but somewhere in-between, and with just a sombre hint of tonality that, just like the songs on Argent Moon, becomes more than the sum of its parts. As "The Conjurer" retreats into a breather, that rising lead melody twists into a descent, and the song attacks and retreats a few times more, each time with more ferocity. Then, this melody is suddenly undergoing some mixed ascent and descent, and the puzzle pieces previously laid out in the song all combine to blast off into a "Starless" climax tapering off into synth drones.

Three of these four songs have already been available on streaming services for a while now, so I'll save my words for the final track. Well, most words, after I raise a glass to the pseudo-easy-listening quasi-ballad that is "The Retinent". Jani Liimatainen is a decent singer, but he could've been off-key for all I care; the song is the least interesting of the four, but there's a vulnerability to his voice that would've not even been necessary for the lyrics to hit hard in the relatability solar plexus. I'll admit that two years ago, when the world suddenly came under threat by a bunch of unwashed bats, I sort of enjoyed the isolation. Little by little, imperceptibly slowly, however, it all went to shit, and by spring 2021 I found myself in a severe state of burnout, catatonia, and emotional instability. Coupled with an already severe case of insomnia made ten times worse by the circumstances, I sort of... lost touch with reality for a while. More than usual, I mean. What eventually got to me was not the social distancing or the fear of illness, but the collapse of all external structure. Eventually I found that "I keep losing track of time / My sense of self where I belong / I keep falling deeper into the hole / Disconnected, all alone". No doubt, words ringing as true to many of you as they do to me.

I found the decision to release three fourths of the album in advance curious, but whether due to label decision or cunning sleight of hand, Insomnium turns out to have saved the best for last. "The Wanderer" sets a campfire-at-the-end-of-the-road vibe with unplugged rhythmic strumming and plucked arpeggios, soon disturbed by reverberating, weary war drums. "The Antagonist" (anti-heroes are still all the rage, eh?) reflects, in layered vocals emphasised by erratic trebly flourishes, on selling his soul "to unveil the secrets … to possess the richest". Then, a plot twist: Argent Moon unplugs its unplugged one last time, Markus Hirvonen trades the omnipresent echo of his toms for a straight-forward 4/4 beat, the guitars chug out an upbeat, highly danceable (yes, please) groove, setting up for a harsh/clean duet: "For death will never touch me / They won't take me", as if finding solace in the fact that an aeon of immortality will sooner or later make him forget every detail of his regrettable past.

I'm not sure whether death is a cure or a curse. I'm dead sure insomnia is no cure, but a curse. Most of all, I'm sure Insomnium will be a frequent cure for the curse of silence from now on. After all, I've 13 years, 9 months and 11 days to catch up with.