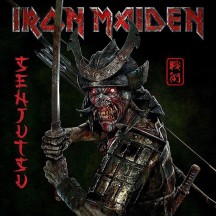 
For 15 years I have awaited a worthy sequel to A Matter Of Life And Death, and after a couple of suboptimal offerings in a row, I began to despair that Iron Maiden had succumbed to the solipsistic lethargy that eclipses so many titans of their stature and longevity. Yessir, when the sound of your name alone is enough to send shivers down the spines of mortal metal fans, there's a risk of becoming detached from reality and retreating into your own personal Empire of the Clouds. Far be it from me to suggest that Iron Maiden of all bands haven't put in the blood, sweat, and blood to deserve the reverence they're accorded, but every time I'm forced to listen to The Book Of Souls to help settle another argument or fulfill my responsibility to this website, I lose a little bit more patience with its quintessential-legacy-act self-indulgence, and until now it seemed not so much a fluke as the underside of a longstanding trend. In short, low expectations for Senjutsu from SSUS, even though they went and made Eddie a samurai to curry favor with me.

Turns out that an inability to self-edit isn't as much of a problem if your ideas happen to be great - this is another extravagantly lengthy Maiden album packed with ten-minute songs and indulgent instrumental ambling out into the sunset, which could have spelled a double-disc disaster, but unlike the confused The Final Frontier and strained The Book Of Souls, Senjutsu doesn't struggle to find its most natural tone or space. When Senjutsu delivers a ten-minute song, it doesn't waste an aggregate seven lounging on the same half-written riff: it slides into that murky, morose register of new-millennium Maiden mystique without making frivolous concessions to speed or volume, and it harvests honest-to-goodness atmospheric suspense from the seeds of melancholy it plants along every chorus. Senjutsu is content to avoid galloping and bellowing without the inspiration to back up a shallow throwback, drawing its power from dense compositions that showcase each member's ingenuity; as far as this modern prog variant is from the band's classic style, it suits them perfectly. Adrian, Dave, and Janick all sound like they've been aching to stretch their legs; whether they're ripping through a solo or following each other across multi-tiered riff evolutions, you can hear the electrifying hum of their strings threatening to burst from the speakers, and as the riffs echo on and on, they maintain their momentum to the end. That's not to say that there is no excessive repetition (the back half of the album demands a forgiving attention span), but the themes chosen for variation on this album are more conducive to lengthy progressions than before, and their fresh energy comes as a relief compared to the desperate recycling of chord progressions and somnambulant licks found on previous albums.

Senjutsu hearkens back to the confident songwriting and impassioned performances of Brave New World, as if Iron Maiden stopped wasting time on vain ambitions and simply buckled down to write an album of killer songs. Though trudging along at a fraction of the speed and serving as a much less volatile introduction, the ominous drums that open the album resemble a revisitation of "Where Eagles Dare" 40 years on. That song was designed to scream to all ends of the earth, "This is Iron Maiden!"; so, too, does "Senjutsu." This is Iron Maiden in the majesty of maturity, as a more reserved and thoughtful band: every member of the band is in fine fettle, with Steve Harris unleashing some his coolest bass work in decades on "Death Of The Celts" and Nicko McBrain effortlessly reaffirming himself on every track as a creature of stupendous textural sensitivity as well as a brute-force plowhorse. For once, it sounds like the synths are used for melodies and proper accentuations as opposed to lumbering mutely in the background and pulling a swath of beige behind them; I love hearing the bold stings and prominent chords in conjunction with layers of engaging guitar work.

For me, Senjutsu's biggest improvement over the last decade of Iron Maiden is in Bruce Dickinson's voice. I really don't care for his performances on The Book Of Souls or some of the recent live material; though he's been in admirable form for a man in his 50s-60s, I've felt the limitations of his range becoming more and more restrictive and I've not felt much recognition of that. On Senjutsu, it sounds as though he has adapted to singing more within a comfortable range, and he has oriented his efforts towards capitalizing on his considerable resonance and presence instead of risky acrobatics. There are still plenty of occasions when he kicks down the door as the Bruce we've always known, however, and he sounds in much better shape altogether, as if the health scares leading up to The Book Of Souls have been wholly conquered. Whether it's his approach or his fitness, Bruce is more the singer he was 15 years ago than the singer he was 5 years ago, and behind him, Iron Maiden as a whole sounds like it has a firm grasp on what it's capable of and where it's going.

Senjutsu may not be the gold-plated dynamite that was Judas Priest's Firepower, which is looking more and more like the album to beat for veterans of their bracket, but it does remind me of Heaven And Hell's The Devil You Know: evocative, well-adapted, and gracefully powerful. At last, I can once again luxuriate in the imperious thrall of Iron Maiden's spacious progressions without getting pulled out of my reverie by dull writing and enervating production; this dark sound that has drifted in and out of vogue for the band since the Blaze days is kind of cosmic, and if Maiden continues to pack the kind of riffs that are spilling out of "The Parchment" and "Lost In A Lost World" and choruses like "Hell On Earth," I think they've got another 20 years left in them.