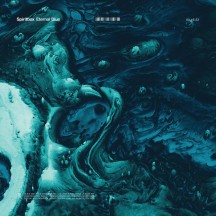 
Few bands manage to build as much hype before their first album is released as Spiritbox have done, so there was a lot of anticipation for Eternal Blue - how well does it live up to expectations?

Spiritbox have existed for five years already, so there’s been ample time for hype to grow, but for a band to have built this kind of reputation without a full-length album under their belt, usually one of the following is true: an early single blew up, or a member is well known from other bands. Both are true in the case of Spiritbox; the project was formed by husband/wife duo Mike Stringer and Courtney LaPlante in the wake of their departure from Iwrestledabearonce, but it was the strongly enthusiastic response to standalone singles such as “Holy Roller” and “Blessed Be” that put them on a lot of people’s radars (including my own). Some of those singles, such as “Holy Roller”, found their way onto Eternal Blue, which left me keenly anticipating this release; however, I have to say that the album, whilst good, is something of a minor disappointment.

To discuss why that’s the case, it’s probably necessary to discuss what it is about Spiritbox that fed these raised expectations. On the band’s initial self-titled EP and subsequent singles (several of which were packaged into a second EP, The Singles Collection), Spiritbox’s sound was fairly firmly planted in the metalcore-leaning djent style. By the late 2010s, that was quite a well-trodden path, but Spiritbox stood out for several reasons, including an expansion of the use of electronics that had been seeping into the subgenre, intelligent exploration of more pop-oriented approaches, particularly vocally, and finally the quality of the band’s writing and performance, particularly LaPlante’s excellent vocal power and range.

These attributes were generally present on singles released by the band prior to Eternal Blue’s announcement that subsequently were featured on this debut full-length (“Holy Roller”, “Constance” and “Circle With Me”), and in general the above stylistic description of Spiritbox is mostly true for the new music on Eternal Blue, so the million dollar question is why I’m not enjoying this album as much as the previous EPs. I think one of the clues to that conundrum lies early on, although not as early as “Sun Killer”. A slow-burning atmospheric introduction to the album that gives LaPlante an early opportunity to display the strength of her singing, “Sun Killer” is an alt-metal-leaning scene-setter that hints at a great record to come, and is probably my pick of the tracks on Eternal Blue.

My first cause for concern came with “Hurt You”; there’s djent tones and a decent pop-influenced chorus, but the song in general feels like a more simplistic and standard strain of metalcore than their previous work, which only extends into “Yellowjacket”. It’s interesting that this song features Sam Carter of Architects as a guest vocalist, as only six months ago I talked about how that band’s transition to a more simplistic, mainstream-oriented approach left little to be inspired by, and there seems to be a similar softening and simplification occurring here. “Yellowjacket” is probably my least favourite song on Eternal Blue, although that is in part due to Carter’s vocals; when you have as talented a vocalist as LaPlante fronting your band, I don’t see the need to bring in guests, particularly when Carter is going to sing within such a narrow range, and it really detracts from this song.

Beyond this double-header, Eternal Blue is an album of ups and downs. The next two songs on the album, “The Summit” and “Secret Garden”, are both on the softer end of the musical spectrum, and in comparison with the two tracks that they follow, make a decent case for Spiritbox to move away from metalcore in the way that a band like TesseracT has, as they both nicely merge djent/prog techniques with pop-oriented vocal hooks. On the flip side, “Silk In The Strings” is a vicious djent juggernaut and “Holy Roller” is a groovy banger. Much of the album seems to be broken up into these strange pairs of songs; in addition to the straight metalcore duo, the soft melodic twosome and the aggressive pair, you also get two electronic-heavy tracks back-to-back in “We Live In A Strange World” and “Halcyon”. These ‘phases’ of the album must have been intentional, but I do find the effect they have on the album’s flow and pacing a bit off-putting.

So do my issues with Eternal Blue boil down to just two generic metalcore tracks and the tracklist order? Perhaps, but I do feel like in general there has been a streamlining of the musical approach on this album. Most of the songs on the previous EPs felt lively and busy during both heavy and melodic moments, which brought a lot to the table to be excited about; here, even on a song such as “Circle With Me”, which was one of the later pre-Eternal Blue singles chronologically, the chorus feels very straightforward in an underwhelming way (frustatingly, the similarly melodic but more vibrant “Blessed Be” missed the cut on this album). There are several directions in which Spiritbox could take their music and be engaging, whether it be to continue with a higher-intensity, higher-complexity djent-core sound, to take a more TesseracT-esque route, or to even just go all in with the poppier elements and expand on what they were doing with “Blessed Be”. However, there’s a few too many songs and sections on Eternal Blue that are stuck in a no man’s land between all these approaches, limiting the potential that any one of them could provide. I guess mainstream metal publications will hail this as a ‘maturation’ of the band’s sound, but surely a debut album is the time to go all out and write something really ambitious, before then dialing things down.

As much as a lot of this review is written through a negative lens, I do think that Eternal Blue is overall a good record. On top of “Sun Killer”, I’m fond of the stretch of songs between “The Summit” and the title track, and “Constance” features a stirring performance from LaPlante set against a rich instrumental backdrop. Ultimately, I might be a victim of my own expectations; at the same time, without the music that drove those expectations to begin with, I would’ve probably already forgotten this album by now, so it goes both ways. At the end of the day, it’s a perfectly reasonable debut that I’m sure will sustain their momentum, but it’s one that has tempered some of my expectations for the band’s future.

Written on 19.09.2021 by
musclassia
Hey chief let's talk why not
More reviews by musclassia ››