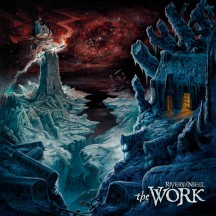 
If the purpose of ‘progressive’ music is to progress over time, Rivers Of Nihil are certainly in agreement.

It’s been 8 years since the Pennsylvania outfit released their debut, The Conscious Seed Of Light, a very good album fairly firmly rooted in technical death metal. However, by only their third record, the breakthrough success that was Where Owls Know My Name, they had transformed into a far more melodically-inclined extreme prog album; the djent-y tech-death during the plentiful extreme sections still bore the hallmarks of the sound they introduced themselves with, but there were longer songs with melody courtesy of clean vocals, electronics and saxophone, amongst other elements. Given how successful this shift was in exposing the band to a wider audience, it is probably unsurprising to learn that The Work is softer than Where Owls Know My Name; however, listeners might be surprised by the extent to which this is the case, or how this softness has been introduced.

The quiet piano and softly sung introduction to the album, “The Tower (Theme From “The Work”)”, is not surprising by itself, although it arguably feels more like something that The Faceless or Between The Buried And Me would be inclined to kick off an album with. The bigger surprises come later, particularly on “Wait” and “Maybe One Day”, two songs that (aside from the occasional brief roar) are entirely clean-sung. “Wait”, with crooning vocals, acoustic strumming and shoegaze-esque guitars, is more an alt-rock track than anything else, whilst “Maybe One Day” feels perhaps indebted to Wish You Were Here by Pink Floyd in its use of acoustic guitars and keyboards, only really entering heavier territory for the stirring climax. The songs are unexpected features on The Work, but that’s not necessarily a bad thing; “Wait”, although not my favourite song on the album, has nice moments, and “Maybe One Day” is a surprisingly great effort at a gentler prog rock song.

One thing that is a feature of both these songs is a scene-stealing guitar solo towards the conclusion, and the solos on The Work are perhaps the album’s strongest element. The ones that feature on “Clean”, “The Void From Which No Sound Escapes” and “Terrestria IV: Work” are amongst the most memorable moments on the record, varied in approach but similarly gripping in each instance. The solos are one element used to inject melody into the songs that aren’t entirely on the soft side; for one, the saxophone that was famously present on the last album is present again here (again played by Zach Sprouse). There’s also further dabbling with electronics, particularly on “The Void From Which No Sound Escapes”, with some quite aggressive synth pulses combined with subtler ambient layers.

There’s a lot of talk of the softer moments on The Work, but this is Rivers Of Nihil; how does the album sound when they are in more extreme territory? Well, as you may note by the review so far, there’s less of that extreme territory than you might expect for a Rivers Of Nihil album; what’s more, when it does come, it often feels less intense than previously. If you’re looking for lingering traces of their tech-death days, you’ll be best served listening to “MORE?”, one of few songs here that really brings the blasts and freneticism on a consistent basis. In contrast, although a song like “Dreaming Black Clockwork” feels heavy, that’s more to do with the tone of the guitar (leaning towards djent without fully falling into that sound) bringing a lot of heft; the actual instrumentation feels closer to the heavier material by Devin Townsend, chugging along with a stomp rather than shooting past. Probably the songs that I feel provided the easiest gateway for parallels between records are “Hollow” from Where Owls… and “Focus” from this album; both have fairly memorable clean vocal hooks in the chorus, but whilst the former is filled with bursts of intensity, the latter is slower and spacious, with whispered vocals in the verses and a general absence of double bass attacks.

So that’s an insight into how Rivers Of Nihil have developed in the last 3 years; now I need to give an opinion about whether these changes have been positive. Well, I’ll get the downer out the way and say that I don’t think it’s going to rival Where Owls Know My Name in my Rivers Of Nihil ranking; I’ve listened to this album a lot whilst trying to formulate an opinion on it, and there’s not enough material on the album that makes me eager to hear it again. Still, just because I don’t love it doesn’t mean that it’s not good; I’d say the album’s a consistently solid listen throughout, with the lead guitar work really standing out. I do also want to give some special praise to “Terrestria IV: Work”; clocking in at over 11 minutes, it’s an ambitious effort from a band that’s not previously dabbled with such epic song lengths, but it comes together really nicely, traversing some of the most intense tech-death on the record before shifting into a joltingly euphoric solo.

If the first 3 albums by Rivers Of Nihil were equidistant points A, B and C on a path from tech-death to a melodic extreme prog sound, The Work sees the band jump forwards to point E or F. It’s a bold move, and whilst it’s not quite as compelling as I was hoping the follow-up to Where Owls Know My Name would be, overall it’s a successful shift, and one that comes with a hearty amount of solid new music, featuring a few surprises.

Written on 22.09.2021 by
musclassia
Hey chief let's talk why not
More reviews by musclassia ››