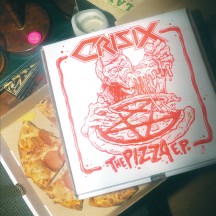 Who doesn't like pizza? I like pizza. Of various shapes, sizes and ingredients. Even though sometimes you'd rather order something else or eat something homecooked, or maybe you're dieting, "Let's order some pizza!" never gets met with negative reactions. Though there are some preferences here and there. Some prefer to leave the edges of the crust, unless it has that cheese filling, and some would never touch a pineapple pizza. There are some elitists who think the only real pizza is the Italian one with its sparse ingredients and thin crust. I think they're all fine. And hell, if I didn't already have a meal ready, I'd order a pizza right now.

And back when we used to celebrate somebody's birthday, whether between friends or coworkers, what was the go-to food to order? Other than the mandatory birthday cake? That's right! Pizza! What became a cultural icon because of Teenage Mutant Ninja Turtles, and God knows what other media that includes it? That's right! Pizza! What's the food you're probably in the mood for right now? That's right! Pizza! As long as you got some variety, maybe order a few vegan ones, everyone at the party will find some pizza to like.

So here's a serving of pizza from Crisix. It's not the best pizza you've had. You won't remember it a week from now. But it's pizza.