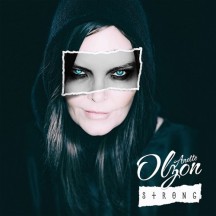 
Disclaimer: I am primarily writing this review because Anette is a personal friend of mine. At least in my version of the truth.

It will be brought up at some point so there you go: Nightwish. Yes, she was part of the iconic Finnish band as replacement for Tarja Turunen and before Floor Jansen. I am a fan of Floor, and more broadly I was really into After Forever, but letting Anette go was probably a mistake in the grand scheme of things (and you all know it). But the past is for the history books, or in this case for melancholic metal listeners who are old enough to have lived through all these events. Regardless, Anette Olzon is one of the genre best female vocalists and she is back with her solo material with a pop rock offering entitled Strong.

With Magnus Karlsson as the sempiternal Frontiers Records songwriter, Strong is anything but a lame duck of an album. This is on par with some of his best work on the Allen/Olzon or Allen/Lande projects. Now, this is basically more of a pop rock album with metal influences than anything else. However, after a few spins, it is really hard not to get engaged by the whirlwind energy and exponential level of well-placed scorn on songs such as "Sick Of You", "Strong", "Parasite", "Fantastic Fanatic", or "Hear Them Roar". Wit a crystal-clear production that highlights the purity of her voice and the undervalued contribution of keyboards to the melodies, Strong is a definite grower of an album. And overall, the quality of the tracks piles up over time to tilt the balance towards a rather enjoyable listening experience.

All in all, it mostly sounds like a mix between a Finnish band called Nightwish and a Dutch band called Delain, albeit with the right injection of growls. Wait a minute, growls? Yes. those are coming from Pain's Johan Husgafvel, who happens to be Anette's husband. Frontiers Records have been varying Anette's involvement in different projects and I believe they have yet to find the perfect home for her talents but Strong is a more-than-decent album. Perhaps she has just successfully made a case for the argument "my voice is all you need to sell records".

The songs have life and energy, primarily courtesy of the super songwriter that is Magnus Karlsson and a bunch of skilled studio musicians to back that up. Sometimes it drags on or feels mostly "out of the box" due to the rather over-used/corny topic of romantic separation. But in truth, this album is on par with what Within Temptation is putting out lately, and to some degree it cements Anette Olzon as one of the most iconic female voices in this murky field of pop radio rock with metal influences that labels rightfully throw at us for instant gratification. Along with the likes of Sharon den Adel, Liv Kristin Espenaes and Anneke Van Giersbergen, will forever stand Anette Olzon.

Written on 25.09.2021 by
Dream Taster
Bringing you reviews of quality music and interesting questions such as: