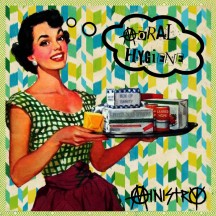 
Always remember to wash behind your ears, people.

My expectations were mixed for Moral Hygiene following the car crash that was AmeriKKKant and the pre-album release of The Stooges cover “Search And Destroy”, the latter of which does the original a massive disservice, turning it from an angsty raw punk track to a slow dirge for absolutely zero benefit. This pessimism was tempered by the inclusion of last year’s “Alert Level”, which offered hope that Ministry would rebound and hit a high that they hadn’t reached in awhile. Coming out of listening to the album, those initial worries were erased and replaced with optimism and enjoyment in a way that a new Ministry album hasn’t in years.

Once Moral Hygiene was up and running, I came to realize this was one of Ministry’s best efforts in years, an album that manages to wash away the sour taste and makes you realize that the band’s best days need not necessarily be behind them. Jourgensen still clearly has Trump in his crosshairs, but he does not rush and stumble over himself like he did on AmeriKKKant to criticise him regardless of the musical content. While much of the album are shots across the bow, they correct the prior misbalance with tracks like “Disinformation” and “Believe Me”, which manage to be solid tracks while conveying the message Jourgensen clearly wants to get across.

“Sabotage Is Sex” has more energy and passion in one track than a good chunk of the band’s more recent output put together, with the inclusion of Jello Biafra adding an extra unhinged element to the song (which, alongside Jourgensen, ticks the crazy quota box so hard it tears through the paper). Coupled with the closing “TV Song (Right Around The Corner)”, you have two tracks that blast out of the speakers and hurl themselves at you as you wonder how it is physically possible. “Alert Level”, “Good Trouble” and “Broken System” offer that industrial flair that you want out of a Ministry record.

The album sounds vibrant and full of energy, with the production sounding crisp and expansive on tracks like “Believe Me”, which balances the band’s heavy side and their more danceable qualities in equal measure. Each element has a solid tone and manages to stand at the forefront of your ears without crowding each other out or knocking the mix off-kilter.

Moral Hygiene still has its flaws, but for the most part they are merely scratches on what is an upgrade in many other ways. The decision to have “We Shall Resist” and “Death Toll” follow each other derails the momentum of the album; rather than serving as the more spaced-out tracks they were intended to be, they feel like filler within the context of the album. The aforementioned “Search And Destroy” is the only egregious mistake, but does have the added bonus of making everything else sound so much better in comparison.

One of the few things in 2021 that doesn’t meet your expectations but for the right reason, exceeding them by a wide margin and making you eat humble pie as you realise how wrong you were: I’m sorry for doubting you Ministry, its been a fun comeuppance.

Written on 30.09.2021 by
omne metallum
Just because I don't care doesn't mean I'm not listening.
More reviews by omne metallum ››