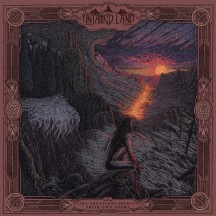 
The scorching sun covers the endless sandy wastes in a blazing golden tide as it sets on another day of lawless savagery. Two figures stand apart, eyes locked, ready for the draw, neither daring to breathe lest the other make his move and bring an end to this bloody rivalry of outlaws. Clint Eastwood pulls out his battle axe.

Do you recall the swells of anticipation you feel when you see Lee Van Cleef narrow his angelic eyes at his challenger, sizing up a roguish gunslinger who is soon to be dead? The excitement that washes over you when you see Gianni Garko robbed of his sidearm, only to overcome the villain with a ludicrous hidden contraption? The betrayal and uncertainty that poison the stagnant desert air when you learn that you’re not watching nice Henry Fonda from My Darling Clementine but evil Henry Fonda from Once Upon A Time In The West? Untamed Land offers a summation of these feelings reinterpreted through the lens of atmospheric black metal, informed by the sounds and aesthetics of spaghetti westerns – as Radu so astutely phrased it when reviewing the project’s debut album, this is “what it would sound like if Sergio Leone directed a Summoning album.”

In other words, Untamed Land slathers reverb over tremolo-picked riffs and leathery percussion, creating voluminous black metal compositions of epic length, and then illuminates that darkness with bright splashes of brass and saloon-style piano. The tom-and-tambourine rhythmic combination elevates the medieval pallor, delightfully counteracted by the fat, sunny guitar lines whose staccato-plucked have shepherded many a nameless rider into the frontiers of Almería, Spain (a.k.a. Italy, a.k.a. New Mexico). The wordless, operatic voice of a ghostly woman echoes through the chasms of black metal’s steady march as the keys shift from Summoning synth to soft prog organ.

It's my impression that Like Creatures Seeking Their Own Forms contains a higher proportion of black metal than Between The Winds, and even starts to sound like post-metal at times; they’re ultimately quite comparable in terms of how much they incorporate that sweet, sweet Morricone sound, though, and especially in the second half this album boosts the level of experimentation with its compositions. “Clothed In Smoke” has a fade-out that’s like an Appalachian folk song being strangled; the banjo and whistle are slowly drowned out by dissonant chugging and sinister drumming and a drone that emphasizes the infernal elements. The otherworldly keys that open “Achamōth” are much more futuristic than Old West (and that title tells you that there’s something more esoteric than Sergio Corbucci going on in there, even if there aren’t actually any lyrics).

What this makes me wonder is whether Untamed Land will twist into a new form on future releases, perhaps pursuing more of the post-metal elements, focusing more on the atmospheric black metal side, progressing into something yet more experimental than this, etc. It’s said often enough, especially around here, that evolving is the way to stay relevant, and I think that that’s generally true, but spaghetti black metal is still so new of a concept and still has so much potential to be explored that I’d really rather see Untamed Land just stagnate for another few records. I won’t be satisfied until I get my black metal cover of “The Ecstasy Of Gold.” Count me in for supporting the continual rerelease of the same album. That said, I’m not reducing this album to a rewrite of Between The Winds, for it is not – but if you were blown away by that first album, this one’ll double-tap you into the grave where you belong.