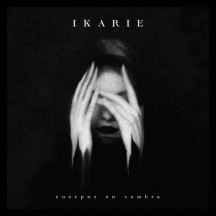 
Something that fills us with pride and happiness here at Metal Storm is when bands that we unearth and reveal to the world start to really grow and show the potential that we first saw in them. One of this man’s latest discoveries is Ikarie, whose debut EP was featured in one of our most successful (as proven by the amount of your votes) issues of Clandestine Cuts. This EP is no longer available simply because it has grown to become a debut full-length, available since September 24th, via Avantgarde Music.

The music of Ikarie is post-metal of the Cult Of Luna and Amenra kind, but there is also a strong death/doom undertone of the Peaceville Three kind. The band challenges the listener in every way possible: sonically, emotionally, and spiritually. They have developed a philosophical concept that they call “cosmic existentialism” and it is “about our freedom and responsibility as a rational species, aware of its insignificant, terrifying and astonishing existence in the universe”. The lyrics denounce stigmas and preconceptions, touching on subjects such as mental illness, emotional trauma, inner ghosts, and scars and wounds left untreated. If you don’t speak Spanish, you unfortunately miss a significant part of the immersive experience that is Cuerpos En Sombra.

Like every noteworthy post-metal band, Ikarie play very well the card of tension-building by using subdued intros and interludes between tracks and then leading them to eruptions that are uncompromising and visceral. “Está En Tu Cabeza”, for example, spends half its runtime brewing in darkness and hinting at an explosive climax that - when it does come - leaves you crushed by the gigantic guitars, the pounding drums, and the tortured growls. At the same time, some of the guitar melodies on this album are truly heart-wrenching; every time I listen to the outros of tracks like “Cenizas” or “La Criatura”, I feel like I will not be able to emotionally handle how devastatingly beautiful they are.

If I can mention some criticism - and this is a personal thing - I would have preferred it if some of the short, interlude-like songs such as “Despertar” and “En El Río” had been turned into full(er) songs. There are some really nice ideas there that feel somewhat unfinished to me. It also seems to me that “Remedio” would be more fitting as an intro track for the album so that “La Herencia” would close it by coming full circle, at least sonically. That said, Ikarie are telling a story and it might have been that they wanted to put emphasis on the cohesion of that story when they decided on the tracklist order.

For fans of post-metal, doom, and/or sludge, this album is a must-listen. It is at the same time draining and fulfilling, soothing and caustic, agonizing and cathartic. It also appears that Cuerpos En Sombra is the first chapter of a trilogy and I, for one, am eagerly anticipating to listen what Ikarie have in store for the two parts that will follow.