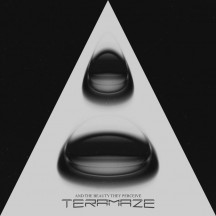 
It’s interesting to see the different effects that the lockdowns in the past year or so have had on people artistically. Some feel completely uninspired, and some go into overdrive; Dean Wells clearly falls into the latter category.

It is less than 5 months since I reviewed Sorella Minore, and mentioned in the introduction that Teramaze had been surprisingly prolific since I’d started officially writing for the site, considering they’d gone several years without a release prior to that point. Well, it’s less than three years since I first graced the front page of Metal Storm and I am now onto review number 4 of a Teramaze record (perhaps fittingly, the Australians get to be my 200th review on this great site), as Sorella Minore has been swiftly followed by the band’s third lockdown record, And The Beauty They Perceive.

I’m actually surprised that this album has come so soon after that record, considering the title track of Sorella Minore was a 25-minute epic, emphasis on epic. In this new album’s promotional materials, guitarist Chris Zoupa openly acknowledges that the composition of “Sorella Minore” was a draining experience, but clearly the (Dean) well had not run dry. Unsurprisingly, however, this record departs from the conceptual focus of its predecessor in favor of standalone songs, which seems like the smart move. It also means that, without the guest vocalists for the Her Halo story, Wells again takes on full vocal duties, continuing to grow nicely into the guitarist/vocalist dual role.

When releasing so much music in such a short period of time, one might expect diminishing returns; however, Teramaze’s albums seem to be gradually improving, if anything. Sorella Minore was a unique venture, with so much of the runtime dedicated to a single grand undertaking. And The Beauty They Perceive, in contrast, is much closer to I Wonder, in that it features three main types of song: the mid-ranged prog track; the shorter, more straightforward cut (ballad or otherwise); and the more ambitious tracks approach/exceeding the 10-minute barrier. As such, it’s natural to directly compare the two records, and I feel that in all three types of song, this new record matches or surpasses I Wonder in quality.

The opening title track is a good example of that first type of song, running for 6 minutes and featuring some complex instrumentation alongside the more immediate vocal hooks. Over time, the thing I’ve come to most appreciate in Teramaze is their ability to write consistently intelligent and memorable vocal melodies, and that ability is on display throughout And The Beauty They Perceive, with strong examples in the gentle chorus of “Blood Of Fools” and “Son Rise”. The instrumentation on this track is also strong, with chunky riffs, and nice solos on the guitar and keyboard (presumably Teramaze will soon need a full-time synths player, at least for live show purposes), but it’s Wells’ vocals that most consistently draw me in, which is testament to how well he’s stepped up to the plate. The strength of the vocal melodies elevates the more direct/straightforward (“Jackie Seth”) and softer (“Waves”) songs above some of their counterparts on I Wonder, although I do think “Jackie Seth” feels slightly out of place appearing so early on the record.

Still, across all five albums that I’ve now heard from Teramaze, I’ve found their strongest material to be their longest songs, and I feel the same way on this album with “Modern Living Space” and “Head Of The King”. The former is paced really nicely in the manner that it develops, fluidly shifting between its primary motifs and the various detours it goes on, whilst featuring some technical yet tasteful solos. “Head Of The King” sees And The Beauty They Perceive leave its best song for last, featuring both some of the album’s best guitar work and some of its best vocal work. It’s quite unassuming to start with, so each time it comes on, it takes me a bit of time to remember why I’m so enthralled by it, but by the final refrain of the song, I’m completely drawn in by the stirring guitar melodies and impassioned vocals.

Producing 3 worthwhile albums within a 12-month window is impressive enough; seeing the quality, if anything, improve as time goes on is even more so, particularly when you’re talking about a band that’s been around for a while (albeit with sporadic activity during that time). I would pick Sorella Minore (an album that, in hindsight, I could’ve scored higher) as my favourite of the trio, if only because of the undeniable quality of the title track, but And The Beauty They Perceive is impressively consistent, meaning that even if the album is only a few minutes shorter than I Wonder, length feels like far less of an issue. Still a relatively overlooked name in the progressive metal scene, hopefully Teramaze’s consistent quality will bring them some of the attention that their countrymates in Caligula's Horse and Ne Obliviscaris have been receiving. In the meantime, as long as the quality remains this good, I’ll be happy to keep getting new albums to review from them every few months.

Written on 05.10.2021 by
musclassia
Hey chief let's talk why not
More reviews by musclassia ››