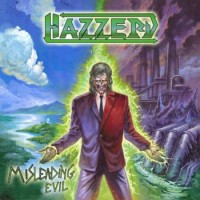 
01. The Tendencies Of A Madman
02. Absolute Destruction
03. The Execution Of The Damned
04. Misleading Evil
05. The Fallen
06. Under The Influence
07. Apocalypse Dawn
08. Road To Nowhere


The year is 2017 and thrash metal has been injected with a syringe of an adrenaline-like substance called Misleading Evil. Hazzerd’s debut album revives all the best elements of 80's-style thrash: fast riffs, energetic vocals, blistering guitar solos, apocalypse-themed lyrics, and drumming that makes you headbang until your neck snaps.

The sound is super crisp, with crunchy, rhythmic riffs and crystal-clear, highly technical guitar solos. And then there's the star of the whole show: Dylan Westendorp. He's the band’s drummer, as well as the lead vocalist and the lyricist. His voice is extremely engaging and entertaining - clean but with a certain thrashy edge, delivering addictive in-your-face vocals. Every musician contributes wonderfully to the entire product: a catchy, energetic, and fun rollercoaster of metal!

Each and every song on this album is fantastic. The lyrical themes are very enjoyable and intriguing throughout, whether it's about a madman escaping the justice system, senseless war, the end of the world, or simply driving fast cars while drunk! But the album's true gift is the unparalleled talented performance and the nuanced song structure.

The first song, “Tendencies Of A Madman", takes no prisoners and opens with a fiery fury of drums before the guitar riffs come charging in, instantly grabbing your attention. Speed is the main theme throughout this album. Songs like “Execution Of The Damned” and “Under The Influence” deliver relentless drumming, a maelstrom of lightning-fast guitar solos, and tireless singing. “Absolute Destruction” might be my favorite track on here simply because of the extremely catchy chorus! Along with backing vocals and riffing that make my heart beat twice as fast, this song is a relentless joyride before finishing with a majestic piece of soloing.

The brilliance of Misleading Evil is that it doesn't rely only on insane speed. It also provides unexpected changes of pace, switching suddenly to very melodic instrumental sections. I can't describe with words how my heart soars when I hear that emotional solo from 3:57 to 4:55 in the song "Execution Of The Damned" - you'll have to listen for yourself!
The title track is a purely instrumental song that epitomizes all the album’s best traits. It starts with very calm guitar-work - almost reminiscent of Pink Floyd's psychedelic rock. And then, the heavy, crunchy guitar riffs once again take control. But only a few minutes later, the song takes a full 180-turn with the introduction of elegant and mesmerizing guitar-work. Despite it lasting almost 8 minutes, the song never gets boring thanks to these surprising changes in pace.

Another highlight is “The Fallen”, with machine-gun-like drumming, followed by some of the most nuanced and eargasmically beautiful guitar soloing that thrash metal has ever seen! The haunting yet satisfying bass plays a prominent role in setting the atmosphere of “Apocalypse Dawn”. I get goosebumps every time after “Apocalypse dawn brings eternal night!”, when the backing vocals come in to sing as one somber angelic choir.

The album ends in “Road To Nowhere” with an absolutely divine piece of acoustic guitar playing mixed with drums that sound like the rhythm of a marching army. The final notes fade to black, and I'm left wanting to spin it all from the beginning again.

Misleading Evil is a masterpiece of thrash metal. It is ultra fast, but also offers impressive melodic instrumental sections. The songwriting is very intelligent, the vocal delivery is captivating, the chaotic storm of guitar solos is master-class, and the entire experience is just so fun and addicting!

Well, as Hazzerd announced on their second track, “We are on a mission - of absolute destruction!”
And all I can say in response is: “Mission accomplished!”