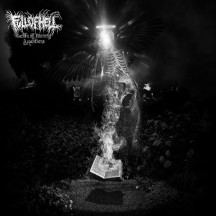 
You can't see it from our relatively small thumbnail, but the artwork is this close to resembling awful late 90s CGI album covers. Somehow it tiptoed around that.

There are very few bands who mastered grindcore in the 2010s the way that Full Of Hell did. With some competition from the likes of Wormrot, Nails, Cloud Rat and Internal Rot, what Full Of Hell did really well was that they didn't really get pigeonholed early on, which is something that they themselves credit as a driving force of this album. Over the course of the band's run since 2010, the band dipped their toes in noise, particularly power electronics, had their grindcore go both in powerviolence and deathgrind directions, collaborated with such names as Merzbow and The Body, and generally never settled down.

Though each of Full Of Hell's full length studio albums, sans the collaborations, are in the 20-30 minutes runtime range, Garden Of Burning Apparitions is a few seconds short of the 21st minute mark, and is thus actually Full Of Hell's shortest. Which, obviously, means that none of its runtime is wasted, and not like it ever really felt wasted on the previous albums, but in a way it feels even more manic this time around. Even with such a short runtime, the album finds time to pull back for an experimental interlude, either just a few string plucks or a barrage of noise. Oh, did I mention noise? I mean noise.

Full Of Hell have always been noisy. They released a noise EP in 2011, so they've been diving in it for at least ten years. And Garden Of Burning Apparitions is not the noisiest of their music, but it's the first time where I felt like the noise had a different flavor. Less of a grind + power electronics, though there's still some of that, but with more actual noise rock this time around. "Reeking Tunnels"' riff, for example, is pure 90s noise rock. Mix then against a backdrop of pretty constant angular dissonance, a surprisingly high amount of saxophone moments from otherwise bassist Sam DiGristine, as well as some guest electronics and bass clarinets in a couple of tracks, and the result is the familiar sounds of the best of noise rock reinterpreted and expanded by one of extreme music's most creative noise makers. And I mean "noise" both figuratively and literally.

Don't let the cover art and the fact that only two songs go over 3 minutes in length dissuade you. Twenty minutes can sound big.

Written on 07.10.2021 by
RaduP
Doesn't matter that much to me if you agree with me, as long as you checked the album out.
More reviews by RaduP ››