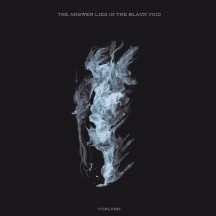 
Quick! Bong-Ra and Thy Catafalque! Doom!

Great! You clicked! Now I must tell you that I haven't been completely honest. The Answer Lies In The Black Void is a duo, half of it indeed being Jason Köhnen, Bong-Ra's mainman, also of Celestial Season and Kilimanjaro Darkjazz Ensemble fame; while the other half is Martina Horváth, who is not really Thy Catafalque, but has been a constant presence on the last three Thy Catafalque albums. So, if that's not enough, Thy Catafalque's mainman, Tamás Kátai, and co-collaborator Gábor Drótos, are guesting on this record. And also guesting is Olly Smit, Jason's bandmate from Celestial Season; and also saxophonist Colin Webster as a final cherry on top.

There's obviously a lot about The Answer Lies In The Black Void that does come down to the caliber of the people involved. There's a lot of influence from the musicians' other projects. There are parts of it that sound like an English version of Thy Catafalque, as weird as it is to hear Martina swap Hungarian for English, while the doom can sometimes remind of Bong-Ra's last album, Antediluvian, where the breakcore jungle sound was swapped for an experimental sludge drone fusion. But most of all, The Answer Lies In The Black Void is an extension of Mansur, a project that already had Jason and Martina in its lineup, and whose ambient exploration seem to have a lot in common with how Forlorn tackles its atmospheres.

Guitars are obviously an integral part of Forlorn, and a lot of it also deals with the classic instruments in doom, whether or not you count organs and synths among them. But the feeling is more "artificial", not in a "this is not authentic" way, but in a "this is a metal album done by an electronic musician" way. Even in its more traditional doomy moments, where there are no electronics in sight (perhaps sight is not the proper word for an auditory experience), the production of this album does feel very odd by metal standards. The production was, of course, handled by Köhnen, so he gives the atmosphere a very unique twist. And that is in the more traditional moments, as Forlorn is pretty filled with electronica as well. Not as in-your-face as one would expect from Bong-Ra's previous work, but something more in line with the dread and bleakness of doom.

Forlorn basically takes the established formula of female-fronted gothic doom and reinvents it from a darkjazz perspective. Saxophones, church organs, violins, electronics. None of these are new ground in doom. But re-arrange them in a certain way and you might unlock a side of doom that lied dormant. Did it awaken here? You know where the answer lies.

Written on 09.10.2021 by
RaduP
Doesn't matter that much to me if you agree with me, as long as you checked the album out.
More reviews by RaduP ››