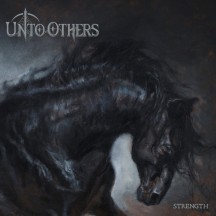 
Very good record, but not as strong as the previous one.

Mana was one of the greatest surprises of 2019 for me: an incredibly catchy gothic album with some strong new wave vibes in the style of bands like The Cure. Back then, I could still call these guys Idle Hands. Now, it’s Unto Others, a name that isn’t as good as the previous one, if I’m honest.

Coincidentally, I feel like the sentiment of “not as good as the previous one” can also be said about the album itself. That said, there are still a lot of good things going on with Strength.

First of all, I can safely say almost every hallmark of Idle... I mean, Unto Others is present on Strength: the charismatic and unique vocals, the new wave vibes, strong pace and flow, etc. Why does this get a lower score than Mana (which I gave a 9)? Well, you see... while everything is mostly in place, I do feel like there’s one significant thing missing. And that thing is the catchy nature of most of the songs on the album. Like I mentioned before, the previous album was incredibly catchy in terms of choruses. This one is solid (tracks like “Hell Is For Children”, “Why” and “Downtown” prove that), but I wouldn’t say it’s consistently on the same level as tracks like “Jackie”, “Nightfall or “Give Me To The Night”. As a result, the songs are a little less distinct from each other. Let’s just say that with Mana, I could identify all the songs (by name) after two listens, and that’s not the case with Strength. Imagine running into someone you knew really well, but you haven’t seen them in years and you need a second to realise it’s him/her. Well, Strength is like that, whereas Mana is that friend you instantly recognize from a distance just on their body language alone.

Now, what are some of the biggest strengths of Unto Others’s latest work? The production is top-notch. It has a beautiful balance in its mix; all the instruments have a strong presence throughout the record without overwhelming each other or the vocals. A very modern production, with a bit of old-school flair added to it for extra style points.

The performances from the band members are as strong as ever. They manage to keep the energy going throughout the whole album and spice things up when necessary. It almost sounds so effortless for them to make something engaging.

All in all, there’s not much more to say about Strength. It’s a good record through and through. It doesn’t reach the same heights as the previous one, but let’s be honest, that’s a really high bar to reach. Much like with Crescent’s Carving The Fires Of Akhet, I was looking for that second album experience that solidifies a band as one of my favourites in the (sub)genre. Strength does deliver in that way for sure. It’s an extremely enjoyable listen, one that’s easy to get into and also to recommend.