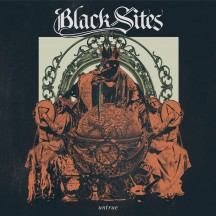 Hailing from Chicago, Black Sites were born from the ashes of Trials, a groove thrash / metalcore band that you need to check out if you haven’t yet, even if you hate the style. Vocalist/guitarist Mark Sugar and guitarist Ryan Bruchert from Trials are joined by Gary Naples of Novembers Doom fame but this time Jose Salazar (ex-Satan’s Hallow) is not mentioned anywhere and I have no idea who is in charge of the bass. One of the guitarists is my best guess.

Black Sites call themselves a progressive metal band in the promo sheet but what I hear is heavy metal with progressive tendencies. A lot of different bands and influences are heard in Untrue and that makes it a relatively diverse listen for the style. So, let’s talk about it.

Beginning with underwater sounds and a tension-building drum intro, and with the bass struggling to come out on top, the guitars kick in to create a Voivod-esque quirkiness paired with the aforementioned drumming, and all that is mixed with more traditional heavy metal-sounding guitar licks. “Sword Of Orion” is an excellent #1 track and when the opening melody of “Call It By Its Name” hits you right after, you know this album is going to be enjoyable at the very least. It was also the point when I decided I would review this album. And I didn’t regret it.

Untrue is packed with songs that are consistently good and have many memorable passages. “Echo Of A Lie”, for example, features a surprise in the form of a bridge with symphonic-like singing over a tension-building riff that is followed by one of the album’s best solos. “The Worst Of Us” is probably the most Voivod-homage song on here and I love the clean guitar bridge in its second half as well as the solo that finishes it. “Nocturne / Everything Went Black” starts in a doomy, Black Sabbath-like fashion but goes on to gallop progressively in a Fates Warning path. “They Eat Their Young” is another great track where Mastodon meet Thin Lizzy.

The production is what makes Untrue sound more traditional, kind of Spirit Adrift-y, which is to be expected since it was done by Sanford Parker, who has produced a couple of Spirit Adrift albums among many other bands (including Voivod). I am not a big fan of this sound in regards to the kind of metal Black Sites play; it is warm and organic and vintage and all, but I would have preferred something clearer and crisper for the progressive element of their music to shine more and for the bass to be more audible. The guitars, on the other hand, do sound really good as far as the Voivod-y parts are concerned, and the drums are also treated the way they should.

I expect Untrue to please many metal fans regardless of the style they prefer. The muscular riffs and the delicious melodies drive the music along with the Mastodon-ian drumming, creating a sound that is familiar but not at all old and tired. The vocals could be better though; Sugar has completely abandoned the rasping of the past (I don’t complain) and his voice is serviceable but not really thrilling. Songwriting-wise, I miss the gothic oddball that “Dream Long Dead” on the Exile album was but Black Sites have stuffed enough variety and quality on here to make up for that. In this reviewer’s opinion, this is three out of three for the band.