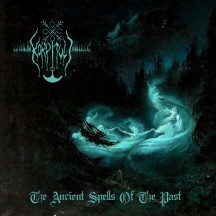 
01. On Forgotten Paths
02. At Nightfall
03. Longing For The Unheard Of
04. Into The Magical Realm Of The Woods
05. The Ancient Spells Of The Past
06. Pale Homeward Souls


Korpituli’s debut album is like a graveyard picnic at wolf’s hour on The Witcher continent: engaging, spooky, and confident, but ever hinting at the next point of interest. The music is good, but this is an album review, so what about the sum of its parts?

In the trilogy’s first installation, monster hunter Geralt of Rivia arrives at the capital city of Vizima. Much like the rest of the so-grim-it’s-rarely-even-funny country of Temeria, cellars are as likely haunted by spirits of children as filled with their bodies. There are also alien zombies, a meth epidemic, corruption, crime, incestuous royalty; it is grim, chilling, and just about real enough.

Korpituli (Hinterland Wildfire) makes music about the afterlife, and that’s pretty much all I can infer from the nondescript lyrical content. Sole member S. Korpituli invokes The Ancient Spells Of The Past as his debut release, and his focus on good old riffs breathes fresh air into a style saturated by ambience and texture. Much like a soundtrack to Geralt of Rivia meditating in the super-haunted Vizima graveyard (maybe don’t centre your capital on a haunted mausoleum, idiots), a lonely tremolo melody repeats for a good while before other instruments join it. I appreciate this sort of confidence in an artist, and Korpituli catches your attention with “On Forgotten Paths”; a precise, no-prisoners statement of intent, and great opener. Lonely guitars, eventually backed up by a full band (raising the member count by exactly zero), take off into semi-lethargic blast beats as the leitmotif progresses effortlessly into a hypno-black trance.

It all sounds very familiar, yet still I found it hard to make any apparent comparisons. Sounds sort of Beherit interpreting Burzum-post-plastic-Casio-black-metal tunes with actual gear while actually sober. After spending their label funding on booze and drugs, they allegedly stole some shitty gear, then used said drugs and gear, and ended up making Drawing Down The Moon into a cult classic. Fast-forward a decade, they dick around with three chords over a half-composed synth lead while screaming at passers-by, or something, creating Engram’s unfuckwithable apex of black metal, “Axiom Heroine”. What? Something’s gotta be the best shit ever, or the word loses meaning. File this as a compliment to Korpituli’s (maybe accidentally) excellent sound, and/or file a complaint into my porta-wormhole bobbing around the lobby outside, then another one about where the first one ends up.

Where was I, right... The opener’s neoclassical vibe stumbles over an ambient synth interlude, then “Longing For The Unheard Of” settles back into mid-tempo. If this song wasn’t the best one here, the burns derivable from that grammatically dubious title would be glorious. We get a Nordic folk death waltz (any hyphen placement between those four words, and we’ve got comedy) spiked with solitary piano tones in a Nordic-folk-death-waltz (my porta-wormhole is full already?). While it is beautiful, entertaining, and much replayed by now, it is also why the album peaks too soon and ultimately fails as a whole; the following parts are just another Monday for Geralt; no end to the hungry swarm around him, and the wish to press ‘W’ twice to dodge forward a bit through repetitive sections creeps up. Unusually, it is the title track that ultimately kills momentum with an uninspired faux-gang shout chorus, and tells me the best trait here is also the worst; there is little incentive to keep going beyond the first 20 minutes, rather than just replaying them.

The Ancient Spells Of The Past contains neat tunes and is a promising debut, but I’m reviewing albums and not songs or potential here, and Korpituli falls short of cohesiveness in that sense. Get a diamond whetstone, sharpen that silver sword, and put up a damn lamp in the graveyard. Atmospheric black is too often just pads and shit; I want more of the riffy sort like this, please, and will opt for the benefit of the doubt. The music is good, probably even great. Now let's see an album's worth of the good stuff.