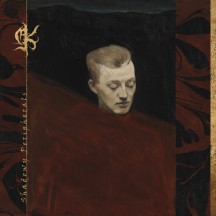 
In the Kabbalah, Netzach is the branch of cognition that is unbridled creativity, unashamed charisma, and perpetual perseverance. The Finnish equivalent is sisu, and this debut exudes it. Gonna be too weird to live? Gotta be too rare to die.

Courtesy of Korpituli Productions and I, Voidhanger Records, I explored the environs of the former's eponymous solo act and stumbled down a rabbit digging forests in holes. I'm used to acquired tastes; I've spent most of my life trying to acquire my own. Single malt whiskey, mathematical physics, and extravagant music are just amalgamations of the childlike sense of wonder I never had. I haven't had whiskey for a while, but Shadowy Peripherals tickles all the latter bones. From the outset, the moniker Alkuharmonian Kantaja (Carrier Of The Primal Harmony) combined with the album title intrigued me with its allusions between quantum philosophy and metacognitive abscission. By the second play through it clicked with me, and several spins later I'm looking forward to many more. It will not be for everybody, perhaps not even for every fan of avant-garde extreme metal, and has lots of space-time for improvement in both sound and songwriting, but it is a debut filled with imagination and promise.

The croaking vocals opening up the album had me worried, but they turned out to be quite of a red herring. The album displays icier shrieks, raspier growls, Snowy Shaw operatics (complete with a trilled 'R'), off beat whispers, backing choirs, falsetto flourishes, and pretty much the kitchen sink, baby, and bathwater. I can't help but think some guttural growls wouldn't be out of place here and there, and while the approach will likely put many people off, they are performed with compelling skill and conviction. The percussion is precise, professional, and progressive, keeping all but a few extraneous passages chained to gravity with ride-ridden blast beats, danceable doom, and jazzy waltz times. Keyboards come into focus at times, breaking off with orchestral bursts or backing up with searing synth leads or eerie pads like 90s nostalgia patches set to 'conspicuous' mode.

A sadly too inaudible bass makes the guitar border on too thin instead of gleefully raw at times, but among melodic leads and rhythms, Shadowy Peripherals contains some very memorable riffs reminiscent of Mardraum-era Enslaved. The opening minutes still do not convince me, but the opener's wacky black metal soon tapers out into a neat doomy procession. The influence of aforementioned Norwegian prog metal masters is evident overall, the rhythms and tremolos in "Oceans Of Senses" being a prime example. Lest I forget (just kidding, I couldn't), the descending harmonies in the latter half of "Harbinger (Of The Fallen Hearts)" make for one of the simply best riffs I've heard in years. The way it connects to the ascending martial motifs leading up to it only serves to put the entire song in excellence territory, and I'm replaying it once again as I'm writing this. In other words: fuckin' A. Don't miss out on this track. Seriously, listen to it below.

The music borders on extravaganza, but save for a couple of excessive moments like the symphonic chorus in "Hounds Of Man" and the aimlessly zany "I Am The Beholder", I find it rarely overblown, only presented through a thin mix not conveying the vast concepts. Assuming we're not talking about levitating, eight-eyed aberrations here (if so, get a psychiatrist; you're a bipedal two-eyed aberration), we are all the beholder(s?), and so is every particle, every instant of interaction. The conditions for self-awareness being badly defined, who knows where the threshold for self-referential perception feedback loops sits and whether it occurs in even larger circuitry, or the largest circuitry itself. Shadowy Peripherals indeed. For all its variety, the album retains its identity all the way to the heat death "Past The Final Winter" closing out the album with well-placed, doomy entropy.

We've had retro-just-about-everything by now, but while a descriptor like retro-avant-garde might sound as paradoxical as the conundrum of consciousness itself, the heavily 90s experimental out-there vibe with the sense of something quite unlike anything I know to be out there made it the first, and still best, style tag I could muster. Judging from the lyrical themes (to the band: c'mon, give me the lyrics already, or I'll have to spend hours extracting them myself) dealing with the absurdity of existence, emotions, and bewilderment of modern science, and the untethered artiness in the keys and vocals anchored by gravelly, progressive riffs and drum work, it makes even more sense to me. Needless to say, this is the archetype of a debut so sprawling it needs to be crystallized (or produced and presented convincingly enough) for me to allow it to keep messing with my brains, but I enjoy a good mindfuck like little else, and Alkuharmonian Kantaja doubtlessly have all the ingredients for an excellent one shortly down the line.

Much like an unbalanced branch on the Tree Of Life, Shadowy Peripherals is a beta version, sometimes frustratingly stubborn, self-indulgent, and unfittingly produced, but ultimately irresistibly charming. Nothing implied.