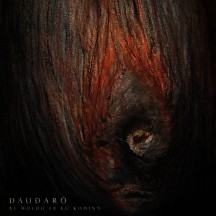 
The point of a journey is to end up somewhere completely different to your starting point. Dauðaró knows this and made an extreme example of it with their debut.

I can’t remember the last time I discovered a band without having any background information readily available on the internet. I must admit that I haven’t jumped into the unknown with frequency this year. However, there was something about the emotionally detached face haunting the fiery artwork that drew me in. Then I saw 2 tracks clocking at 30 minutes in total and everything was in Icelandic. So I jumped.

In the metal world, Iceland has been mostly known for amassing a healthy number of black metal bands and projects for the past decade. Dauðaró doesn’t seem interested in meeting people’s expectations though so instead we are treated with funeral doom metal and then something completely different. Oh friends, does this album take a turn for the weird and different.

At first the slow, painful riffs pummel through like a silent, gigantic glacier. The droning effects add a very strange type of warmth to the track. Some of the lead guitars have a particular twang to them that make them sound much warmer and brighter. It makes for a confusing, paranoid state of mind as the music remains highly bleak and brooding. The vocals are low in the mix and whispering as if coming from a dying creature. Rather fittingly, the drums have a lifeless sound to them as well. This production is deliberate and well thought out as the hollow drums add another unnerving and inhuman layer on top. These lo-fi aspects seem like a nod to the elder gods of Skepticism and Thergothon. But the dark, disturbing and emotionless tone of the guitars reminds me of the ritualistic doom of The Funeral Orchestra. The creepy factor is high on Af Moldu Er Ég Kominn. Worst of all is the constant feeling somebody watching you or that a climax is about to hit you yet you only feel the constant pull on the back of your head. No release.

The keyboards kick in and slowly but surely we are leaving behind the familiarity of metal and distortion. We step right into deep, ambient music. Ghostly synths take over. The organ-like synths are remarkably gloomy and I get a slight taste of Bach due to the maniacal intensity that is slowly but surely unraveling. This sound is very short-lived however as the pace picks up greatly and evolves into orchestral madness filled with strings and melodies that hint slightly at Dead Can Dance. I’m very impressed with how Dauðaró created two very different songs that connect so seamlessly. The change is so gradual. The final result is hypnotic, elegant and oh so dark. It’s the waltz of the dead. But as the multitude of skeletons finish their final dance, the harsh static sets in. The bell tolls and you are left alone.

You are in a place completely different from where you once were.