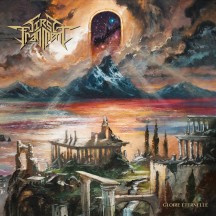 
I don’t know the first fragment about complicated philosophical banter, so I’m glad that First Fragment’s second album can at least let me pretend that there is no Heidegger hiding in here (although I don’t speak French anyway, so what does it really matter?). But if they ditched the complexity in titling, they sure didn’t ditch the complexity in music.

It's strange to think that it was a whole five years ago when we were graced with First Fragment’s sensational debut, but I suppose that founding guitarist Phil Allaire-Tougas has been quite the busy beaver since then; aside from debuting Chthe'ilist earlier that same year, the last few years have brought more of his work with Zealotry, Atramentus, Serocs, Equipoise, Eternity's End, VoidCeremony… well, that’s enough for now, but you can understand why that whole five years elapsed before Gloire Éternelle appeared, although I could easily believe that it would take ten solely to compose, orchestrate, and record the infinitesimally ornate instrumentation vacuum-sealed into every instant of this album. Any three-second clip of this album contains more notation than the entire career of your average punk band.

There’s one other spot of interest before we move on to the actual music: bassist Vincent Savary left First Fragment shortly after the release of Dasein, and although he does return to lend his prodigious talents to “In’el,” it’s his successor who holds the most interest for me personally. Dominic “Forest” LaPointe is a tech death legend who has had free reign over the Canadian scene for decades now, and you’ll recognize him from his work with Quo Vadis, Augury, and Beyond Creation, among others – you’ll probably see him in Gorguts, too, if Colin Marston ever gets tired of it. He’s the guy who changed my perception of bass potential in metal even at a time when I was more actively into tech death than I am now, so you can expect that introducing him to the lineup of what was already one of the most promising stalwarts of this generation only improves First Fragment’s already unbelievable pool of talent. But that’s quite enough background; let’s move on to the foreground.

What strikes me first about this album is absolutely every part of it simultaneously. The frequent acoustic guitar-driven interludes of Dasein make a comeback right away, opening the album with a very Spanish-sounding title track that makes a play for the best instrumental jam of the year before it even breaks into metal; those flamenco-inspired acoustic passages have a stronger presence throughout the album and they feel better developed on Gloire Éternelle as a whole. I love that side of First Fragment – not only is it uncommon to hear acoustic guitars employed with such expert precision and feeling in a metal context, but it adds a great deal of unique flavor to the sound and it allows the members to demonstrate that their skills are not limited to metal alone. Not that there should have been much doubt about that, considering the degree of proficiency in classical composing and shredding you’ll hear throughout, and Gloire Éternelle goes the extra mile by packing some funky grooves into the trunk (so watch out for those; the beat gets bumpy).

Forest shortly speeds into view at the outset with his characteristically fluid and resonant soloing, always mercifully audible but never overpowering when trading off with the guitars. As fantastic an album as this is overall, his bass work is what makes Gloire Éternelle a complete experience for me, and I hope First Fragment can hold onto him for a while longer; writing this review has reminded me of how long it has been since I last listened to Beyond Creation and that Forest is quite simply one of the best bassists in metal. Drummer Nicholas Wells, evidently eight-limbed, not only matches but complements Forest’s rhythmic fills and punches; I want to call him a standout talent as well, but truth be told every member of this band would be the center of attention in almost any other project. Obviously tech death is flush with prodigies – but there is a difference between musicians who can play well and musicians who can play well together. First Fragment has stylistic and tonal range that a lot of other bands in this field sorely lack, and the richness of Gloire Éternelle reflects palpable musical symbiosis.

The production has backed off ever so slightly from the intense spitshine of Dasein; though First Fragment was never the worst offender in this regard, I find that a lot of modern tech death enjoys being sandblasted into a smooth oblivion by engineering niceties, and that’s an easy way to make your technique-reliant style sound like nothing more than a boring classroom lecture on how to play fast. Gloire Éternelle is neither especially raw-sounding, maintaining a high standard of clarity and cleanliness in every respect, but it feels slightly more organic than Dasein by comparison, with just enough of a genuine edge to really smash when it goes for the speed runs.

As repetitive and cannibalistic as the genre often is, it’s not at all true that hearing one tech death album equates to hearing them all – if there’s a band out there that could convince you of the genre’s worth, it’s First Fragment, who will never sacrifice mood, tonality, flow, or flavor for a mere display of technical showmanship. I want to single out the 19-minute “In’el” just because of how monumental it is, but there are no weak links and no blind spots on this album, and any second you can hear Forest is pure bliss. It might be a bit presumptuous to title the album so, but this is surely enough to earn First Fragment that gloire éternelle.