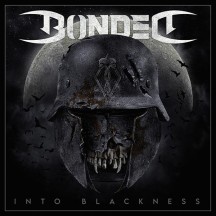 
No, not that black album.

A name I did not expect to see back so soon is that of German thrashers Bonded, who released a decent debut in last year’s Rest In Violence. Returning in a flurry of up-tempo riffs and cascading metal, Into Blackness marks the next step in the band’s growth. Building upon their debut album, Into Blackness offers listeners another batch of high-octane thrashers, with the band experimenting at the fringes of their sound in both musical and songwriting approaches. With half of the album comprising a flowing narrative, the band do try to tinker with the formula of what is atypical of a thrash album, even if they are not moving far from their roots.

What Bonded deal in is the up-tempo 'sledgehammer being swung wildly and continuously' style of thrash; while this does engage the listener initially, it does become less and less gripping the longer it goes on. While there are moments scattered throughout, such as lead single “Into the Blackness Of A Wartime Night”, which features a nice melodic guitar riff and a good chorus to boot, they are too few and far between to make an impact on the album overall. When the band are firing on all cylinders, they can produce some good and catchy thrash, with tracks like “Final Stand”, “Watch (While The World Burns)” and “The Eyes Of Madness” building on the promise the band’s debut record offered and delivering some worthwhile moments that will have you returning to these tracks every so often.

Bonded have the problem of having a good recipe and ingredients, but they are unable to make a good meal with the sum of their parts. The guitar tandem of Bernemann and Tsitsis produce some strong riffs that have a great tone, but the resulting songs still feel lacking; the same can be said of vocalist Bajonczak, who has a strong voice and one that suits this style of music, but the band are unable to take full advantage of his presence.

This in turn leads into the main problem with Into Blackness, that being while it does do intense thrash metal well, it does little else beyond that, leaving you with a monotonous and overlong experience that does make listening to the album in large chunks dull. Where the band do try to branch out on tracks like “Destroy The Things I love” and drop the tempo, it isn’t done in an engaging way, and alongside "Ill-Minded Freak”, it feels like a chore to listen to rather than a welcome dose of variation.

An improvement on last year’s effort, Bonded is a good step forward as the band continue to grow. While not the finished product, Into Blackness features tracks that warrant repeated listening and will likely pop up on several thrash playlists for months to come. While the band have yet to fully bring their talent to bare, they continue to provide a lot of promise and possibility on future records.

Written on 19.11.2021 by
omne metallum
Just because I don't care doesn't mean I'm not listening.
More reviews by omne metallum ››