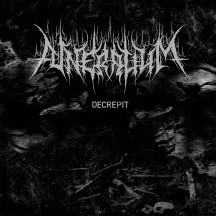 
01. Aviditas
02. Ruination
03. The Lunatic Escalation Towards Extinction
04. The Terminal Purge


While discussing the state of the environment, comedian George Carlin said: “The planet isn’t going anywhere. WE ARE. We’re going away. Pack your shit, folks”. With Decrepit, Funeralium isn’t just portraying humanity’s misery caused by its own hand. They also relish at the mere thought of a world devoid of people. Anger and bitterness has created a type of hope driven by visions of a barren Earth.

"We all just care about our own navel, nothing else matters
All these lukewarm reforms have built our own tombs."


Formed almost two decades ago and with four releases under their belt, the French extreme doomsters take their sweet time with each opus. The last time the patient fans were rewarded was with the colossal Of Throes And Blight. Over 90 minutes of what the band best described already with the title of their 2004 demo: Ultra Sick Doom. It was a maelstrom of negative emotions that completely engulfed the listener with its gargantuan compositions that distorted the sense of time and space. How can you possibly continue after releasing such an album? Apparently Funeralium are in possession of a bottomless well of sheer willpower. How can you write songs this long and make them coherent? It must take nerves of steel to be able to endure such a songwriting process. The dedication to such craft is what lies behind these inspiring compositions. With a sound and characteristics of their very own, it is about time Funeralium are promptly recognized by all as one of the heavy-hitters within extreme doom metal.

"No one took even half-measures, no one would consent to make small sacrifices.
We have always scheduled for tomorrow what should have been done yesterday,
Leaving this self-created burden to the new generations to come."

The album kicks off with industrial noises that agonizingly build up into one disturbing hell-hole. Black metal elements manifest themselves through painful walls of riffs. These climaxes are reached in such an organic and genuine way that it almost seems improvised. The band clearly know what sections need to keep on going and further develop, or what to change, or when to release. All sections flow freely and logically with well-placed moments of quietness. This is one of Funeralium’s biggest strengths and what sets them apart from most bands. It is really hard to maintain this menacing and ugly atmosphere during the quiet sections, but they don't seem to have any problems keeping that vibe. With the help of silence and a perfect production, the bass and drums alone produce such a tense, rich and dark atmosphere that truly grabs you and refuses to let go. Melodious riffs and leads come far in-between but they are just too painful and sorrowful to bring any form of light to hold onto.

"Never satisfied, always dribbling, greed and envy will forever lead.
Make the earth bleed, soil it shamelessly, run it dry until it will gulp you down."


There is simply no beauty or tranquillity to be had throughout the whole album. This is further ensured once the vocals appear. The shrieks, howls, growls and even some light use of clean vocals are so full of bitterness and hatred. It is a suffocating endeavor and one hell of a performance by all throats involved. Funeralium make sure the message rings loud and clear, as the lyrics are for the most part perfectly understandable despite the nature of these cries. These are not protests songs as much as they are judgement songs. The bleak, misanthropist lyrics paint a painfully true image of our unfair world. Of the mayhem we create and the frustration that is seeing humanity kill itself through greed and poor thinking.

"An infinity of dead seas...
No more vice, no more greed, it’s so soothing here.
No more gods, no more faith, it’s so peaceful here."

Decrepit is perhaps Funeralium’s least nasty album both song- and lyric-wise. However, instead it punishes the listener with hateful tunes that flow in a very naked, honest way. The songwriting and choice of track lengths was perfectly chosen. The opener “Aviditas” prepares the listener for the two main courses, while “The Terminal Purge” is perhaps one of the most cathartic outros achieved in modern doom metal and re-affirms the devastating nature of the middle tracks. Hate, mourning, anger, anxiety, disgust, impotence and a final sense of acceptance. It’s all too palpable, too real.

"...In a few hundred years Earth will be mended."

There is a promise for a better tomorrow. It just won’t involve us.