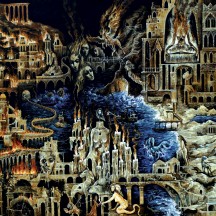 
01. Into Waters Of The Underworld
02. Consecrating The Shrine Of Undoing
03. Beyond The Stellar Gates
04. Treader On The Dreamless Path
05. Throne Between Worlds
06. Metempsychosis (Transmigration Of The Soul)


That's not the cover art that I expected for this.

If I had absolutely no idea who Ars Magna Umbrae are and I gave this a listen based on the mesmerizing cover art, I'd say the music fits the cover art. It's esoteric mid-paced black metal that knows how to evoke dark atmospheres. But having seen the previous two cover arts, there was a bit of a pattern. There was one that looked like a vulva, then one that had a pair of breasts on it, and you know damn well what their debut EP looked like. I mentioned in my review of Apotheosis that "trying to sense a pattern into what the next Ars Magna Umbrae will have in store for us, I think us booty connoisseurs will finally get our due". I was wrong. But I also hoped that "K.M. will also likely get better at his craft". I was right.

Perhaps the man behind the one-man project got a bit tired of all the cover art innuendos that I made. But there's still two pairs of breasts on the cover art. So who knows. All I know is that the cover art is stated to represent "a plutonic underworld of madness and despair, located on the border between the world of the living and the world of the dead". I'll take that. Ars Magna Umbrae always had a great knack for delivering these otherworldly melodies, quite similar to what Akhlys do, but still having a somewhat distinct take on it, in a way that is hard to express into words, since both bands have a slight mythological feel about them. But what is easy to tell is that the craft has improved in the short span of one year since Apotheosis.

The one thing that I was on the fence about in Apotheosis was its sense of flow, which I described as gently pulling the rug from under your feet. Basically some transitions could have been smoother, but the effect didn't always feel off-kilter in a bad way. That sense of flow did get straightened-up for this release, and here stuff like repetition, hypnotic melodies, layering, pace changes, all contribute to that dreadful dreamlike trance. While most of it is in slow-to-mid-paced territories, it makes best use of slower and quieter moments in a way that keeps them very dense, as if it were a cloak of sound ready to have you sink in it. A lot of atmospheric stuff is said to be able to transport you to another world, and Throne Between Worlds does that, except it leaves no other world to be imagined even if it is otherworldly. It only gets you to imagine that sunken feeling of being trapped in it.

This is what I imagine it would sound like if you never woke up.

Written on 19.11.2021 by
RaduP
Doesn't matter that much to me if you agree with me, as long as you checked the album out.
More reviews by RaduP ››