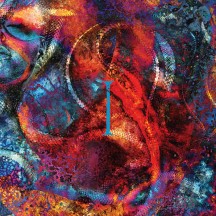 
Given the large number of supergroups that turn out to be lesser than the sum of their parts, it’s intriguing how many recent collaborations have delivered the goods.

Maybe I’m just ignorant of history, but ever since Cult Of Luna and Julie Christmas joined forces on Mariner five years ago, there seem to have been far more major collaborations appearing on my radar. This year alone, in addition to Bloodmoon: I, The Body and Big Brave released Leaving None But Small Birds and Elder and Kadaver will soon be letting Eldovar into the world. The seeds for Bloodmoon: I were likely laid earlier than either of these collaborations; a joint performance by Converge and Chelsea Wolfe at Roadburn Festival (which also first brought Emma Ruth Rundle and Thou together) in 2016 titled “Blood Moon” was the genesis of the concept that has ultimately been realized in this new record.

I actually witnessed that performance at Roadburn, but with the silence that followed, it had almost disappeared from my memory by the time this album was announced earlier this year. As such, I approached Bloodmoon: I with no expectations for specific passages of music from that performance to appear on this album, which is probably for the best, as the contents of the record are new songs in the vein of that performance rather than a recreation of the material performed on stage five years ago. Now, what is that vein? Where is the middle ground between the metallic hardcore aggression of Converge and the slowcore melancholy of Chelsea Wolfe?

The intriguing thing about Bloodmoon: I is that, whilst it’s not easy to envisage what this fusion would sound like without hearing it, once you put the record on, it makes a lot of sense. On balance, the record is substantially closer to Chelsea Wolfe than Converge; there are bursts of aggression that approach their standalone material (see the opening of “Viscera Of Men” and “Lord Of Liars” for examples), but there’s far more subdued material that could make a Chelsea Wolfe solo album, and the space in between the extremes, whilst varying between the likes of doom (“Daimon”) and alternative (“Tongues Playing Dead”, “Failure Forever”) metal, only really has the Converge intensity courtesy of Jacob Bannon’s pained shrieks. At this point, it’s worth acknowledging the presence of Stephen Brodsky in this collaboration (and Wolfe’s regular collaborator Ben Chisholm); once a member of Converge, Brodsky has explored more alternative directions with his own project Cave In in the interim, and I’m sure his contributions have helped shape the ‘middle ground’ of this record.

The best thing about Bloodmoon: I, really, is that it truly feels like a collaboration, something that neither project could release by itself; even Mariner, as great as it was, still felt like material that could have been produced by Cult Of Luna (at least instrumentally). This album, on the other hand, taps the experience of the likes of Kurt Ballou and Brodsky and uses it to take Wolfe’s usual music in an exciting and emotionally gripping direction. “Blood Moon” is eerie and sinister, Wolfe’s vocals adding both a vulnerability and ominous vibe to an increasingly intense opener, while “Coil” similarly builds and intensifies, subtly shifting gears from a melancholic group-sung acoustic opening to a grandiose, layered climax. As much as I enjoy the heavy material here, the songs that lean closer to Wolfe’s solo material are the standouts for me. The bluesy ballad “Scorpion’s Sting” is delightfully moody, and “Crimson Stone” steals the show with its potent atmosphere and stirring collaborative vocals.

Even though I did enjoy the initial collaborative performance at Roadburn all those years ago, I’m surprisingly delighted by what this project has produced in Bloodmoon: I. Taking strengths from the various individuals involved to produce something connected to their respective roots but at the same time completely distinct, it brings beauty, heart and ingenuity, as well as some measured aggression, and acts as a wonderful example of what collaborative records can achieve when they reach their potential.

Written on 22.11.2021 by
musclassia
Hey chief let's talk why not
More reviews by musclassia ››