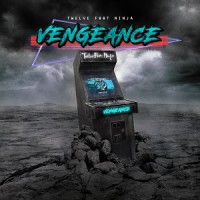 
One of the things I admire from Twelve Foot Ninja (TFN) is the ability to always sound fresh and dynamic while progressing oddly... I mean, they're evidently a djent band that have many progressive elements but don't abuse them. They know how to keep a balance between the pure metal instrumentation and the alternative instruments like the acoustic guitar, the piano, and a ton of other instruments they employ. If they were able to make a huge impact on the metal scene with just one album, Silent Machine, with legendary tracks such as "Mother Sky" and "Ain't That a Bitch", they proved they had a strong personality and wanted to sound nothing like the usual bands, deciding to not be conformists, evolving and experimenting, showing that they're indeed ambitious, and more than all, proving several times that traditionalism doesn't go with them.

In 2012, Twelve Foot Ninja struck with the notorious shuriken of Silent Machine, and in 2016 they showed off with Outlier, now colliding in Vengeance. With Vengeance, the Pandora's box was open, unleashing all the creativity, fluidness, heaviness, and dynamism in a burst as big as the Permian explosion. Tango, electronic music, darkwave from the 80s, chilling beach music, funk, pop, symphonic, and much, much, more. What is this? But you know what's hilarious? The shock I had when they switched from something really heavy to mariachi music in "Culture War". I don't even know words to express that emotion but I swear it's going to steal a smile from you.

"Start The Fire" brings back the nostalgia of the 80s, while "Long Way Home" captures all the epicness of a symphonic arrangement with a strange mix of reggae and chilling-at-the-beach sounds. "Vengeance", the album track, is able to pull off a dark electronic blend alongside TFN's characteristic and paced djent. Just as the name says, "IDK" is one of the most bizarre songs on the album. You don't actually know what is happening since it's a complete pot of different ingredients: funk, jazz, 80s/90s electronic. "Shock To The System" brings all the energy from the legendaries Daft Punk and Jamiroquai. But with... tango (not sure if it's actually tango)? I have never imagined that would happen.

Vengeance might sound incoherent for a considerable public, pointing up at refills and unnecessary moments, being a hard album to digest. Personally, I feel like this album is a huge achievement for the band since they've been always exploring a lot of sounds from the first album. Being able to play what you want to play, and not just sticking up to the expectations of the public, not sticking up to your genre and style... that takes courage and I bow to it. TFN took a big risk with Vengeance, which will attract new listeners and will scare away old ones, but it surely shows up their true own identity, because it has always been there. I'm sorry, but to begin with, the band had to craft this album.