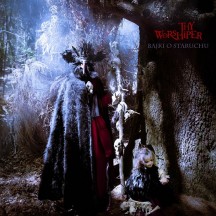 
Unique folk black metal is pretty hard to come by these days.

The mere thought of pagan folk and pagan black metal usually evokes the image of men dressed in animal furs with some sort of facepaint and trying to recreate either Hammerheart or Suden Uni, as well as a genre where trying to find good bands in Eastern Europe is a minefield full of blacklisted bands. Like all genres, it's hard not to find it saturated with too much of the same, but that also helps the really unique stuff stand out. And even if most of my favorite albums in the genre came out in the 90s and 00s, there was one album in the late 2010s that really marked the genre as "still worth being excited about" for me. That was Thy Worshiper's Klechdy, a two-part epic whose dedication to having an original take on Slavic folk music instead of having it either as a gimmick or as just a version with metal guitars on top. Five years later, we have a follow-up.

Right off the bat, Bajki o staruchu doesn't have the immensity of Klechdy, mostly because it's no longer a double album, but that only saves up a bit over twenty minutes of runtime. Bajki o staruchu is still a pretty big album, and even if it isn't entirely consistent, it's not like any of the Thy Worshiper albums that I listened to were. But Klechdy sits awkwardly between the brevity of their early stuff and the massiveness of Klechdy, but it also sports their best cover art, so there's that. And since I discovered the band with Klechdy, it's pretty hard to beat that in terms of immediate impact. So Thy Worshiper do that by making the album even weirder. And I guess a way that I could describe it is that it sounds as if Madder Mortem tried to do a Negură Bunget album. Or if Thy Catafalque did a score for The Witcher.

I'm making the last comparison not because I'm still playing that game too much (I swear I'll also play the first two), but because having another frame of reference for Slavic folk makes it easier to fully visualize the world of Bajki o staruchu, centered around, as the album could be translated as, "fairy tales about an old man". The Polish lyrics don't really let that be obvious to non-speakers, but the dark atmosphere of the record certainly has a sort of folk horror vibe that feels specific to the culture. It's hard to put into words, but everything from the folk instrumentation to those little guitar melodies bring that world to life. Thy Worshiper did go through a lineup change in terms of the drummer and the female vocalist, the latter of which making the biggest impact on Bajki o staruchu, considering how her voice covers most of the record, ending up as one of the highlights.

The album feels a bit more left-field in its melodies than Klechdy was, and it seems like there's an even bigger ritual ambient presence, which does lead to the album being fantastic at creating an immersive soundscape, but I'm most conflicted in that a lot of it works best in the album's full-listen in a way that feels more immersive than engaging. Part of it is also because the album's odd-ball nature makes it a bit more of a difficult listen, but also because it feels odd-ball in usually the same ways. So it's the equivalent of finding a cool unique trick, but relying upon it too much, so that once the effect wears off, it feels repetitive. Which wouldn't have been that big of an issue if the band had more focus on things other than the immersion, or if it was shorter.

But still, it's really great that a pagan folk record gave me any thought other than "I have heard this before so many times". Even better if that thought is also not "this is awful". More often than not, it's a mixture of awe and disquiet.

Written on 06.12.2021 by
RaduP
Doesn't matter that much to me if you agree with me, as long as you checked the album out.
More reviews by RaduP ››