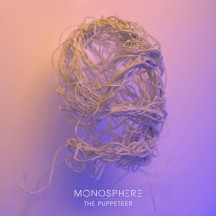 
Metal is at a place where it’s hard to envisage where the next truly unique sound will come. In the absence of this, finding new ways to merge existing styles is the best way to stand out, which is something that Monosphere recognizes.

Born from the ashes of Lost Without Direction, Germany’s Monosphere have taken strides on the journey to their full-length debut to create something that stands out from the crowd, culminating in The Puppeteer. When you isolate all the building blocks that comprise the sound of this record, many of them look like familiar cohabiters: djent, metalcore, progressive metal and post-metal, with additional hints from more extreme metal and occasional non-metal influences. Djent and metalcore are very closely entwined these days, and progressive post-metal bands are increasingly emerging; however, I don’t think I’ve heard all these styles placed together before, and not with this outcome.

It’s not that these elements are used simultaneously (is that even possible?), but they are interwoven into a record that feels fluid and continuous (partially due to the generally short track lengths, meaning that it feels like a complete singular piece rather than a collection of songs) and their appearance over the course of the record feels natural. The first couple of songs lean more with the djent and metalcore, with crunching tones, complex rhythms and harsh screams on the title track and “The Luminary”; however, both songs flirt briefly with slower and more atmospheric moments, which give an early indication of the post-metal explorations that more substantially occur on the likes of “The Lover” and “The Marionette”.

Furthermore, whilst those two tracks start off as post-metal songs in the vein of Salvation-era Cult Of Luna and remain so for large stretches of their runtime, “The Lover” naturally segues into a djent breakdown towards its conclusion, whereas the guitar leads late in “The Marionette” naturally follow a Cult Of Luna-esque trudge to shift the song into metalcore territory almost seamlessly. There’s a strong dynamic range on The Puppeteer, with frantic blasting and deathcore tendencies on “The Verdict” countered by the ambience of “No Strings Attached” and subdued introduction to “I Am To Blame”.

Monosphere aren’t a band that rely on technicality and rhythmic complexity; many of these builds are spacious, more focused on dynamics and sheer crushing weight in the heavier moments. Nevertheless, there are mathcore currents running through portions of the album, which may not be surprising given the inclusion of The Hirsch Effekt’s Nils Wittrock; the second of two songs featuring Wittrock, part 1 of the “I Am In Control” suite, messes around with unusual rhythms, as does part 1 of “I Am In Conflict”. These two mini-trilogies bring the full range of Monosphere’s ambition to the fore, traversing the range of the band’s aggressive and atmospheric tendencies in compact packages.

The Puppeteer is a very compelling and solid debut outing for Monosphere. The one point I could make against it is that, whilst all the different ideas are incorporated effectively alongside one another, they don’t necessarily feature the strongest versions of each individual style. If they can press forward with the genre-mashing ambition of The Puppeteer on future records whilst making the specific components within each track more compelling, Monosphere could be onto something truly exciting.

Written on 16.12.2021 by
musclassia
Hey chief let's talk why not
More reviews by musclassia ››