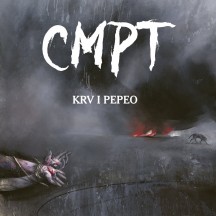 
Burzum and Wolves In The Throne Room walk into a Serbian bar, with promising results.

I know little about Serbian metal. Perhaps because there are not a lot of metal bands from Serbia. There’s Forever Storm, and Númenor, and, uhh… Well, here’s a black metal band called Smrt (Death, stylised CMPT), with their debut full-length Krv I Pepeo (Blood And Ashes), released on Osmose Productions. Doesn’t sound very original, I know, but see, that’s not such a bad thing, and I think these guys know it. It sure sounds like it. There is nothing wrong with playing an established sound as long as you do it well! Besides, Smrt turn out to wield a wide variety of influences, and wield them pretty damn well.

Smrt pulls off some Norwegian second wave-influenced black metal, made only better by some melodic Sargeist-meets-Wolves In The Throne Room additions, with conviction. Taking into account this is a debut album (only superseded by the Mrtvaja (Still Water) EP, also released in 2021), I’m finding myself having great expectations for this band. Krv I Pepeo opens up with “Seme Ponoći” (Seeds Of Midnight), which blasts off with a semi-melodic, introspective sound like Burzum’s raw, melancholy style, while the title track sounds more like Mayhem’s famous 90s album. The lyrics deal with some darker aspects of Serbian folklore as a metaphor for the country’s war torn past, which makes the album’s cover art all the more gripping in its brutal, yet personal simplicity. The mid-paced “Prokletije” (referring to the Accursed Mountains between Albania and Montenegro) is a good, ominous song, but I’m not yet convinced by this band’s ability to make a long-lasting impression.

Luckily, “Vrani Pir” (Feast Of Crows) bring more of a pagan influence, and it really works. A crying woman introduces some nice synth choirs backing a tremolo riff, before Smrt bring out a beautifully unpredictable, melodic hook backed by wonderfully frenetic drumming. The riff goes through various variations, and after four mostly instrumental minutes, I mostly want to replay the song over and over. Imagine stripping Agalloch’s Marrow Of The Spirit of their Cascadian influences, adding some of Wolves In The Throne Room’s epic sensibilities (and then not having the decency of making a Moonsorrow-length song out of it). I wish this song went on for much longer, it’s so damn good. Here’s to hoping Smrt learn to have the confidence to play to their strengths for their next album; their strengths being a beautiful sense of melody and atmosphere mixed with a very raw, classic style of black metal.

These strengths continue to pop up throughout the album, especially in its more melodic moments, and in the vocalist’s (they’re all anonymous) urgent roars and howls accentuating the flow of the music. The longest song on Krv I Pepeo, “Memla” (Damp Air), settles into a hypnotic groove, where just enough reverb to mid-high-pitched shrieks bring to mind a beleaguered city, with just enough ecstasy to them to sound slightly disturbing. Hardly celebratory, but stubbornly defiant; the unnamed vocalist of this group admirably conjures visions of urban decay mixed with mist-steeped mythology. The song goes on for a bit too long, but fits well into the flow of the album. On “Mesečev Zub” (Crescent Moon) the album starts to wear out its welcome… until he in the second half brings out some truly anguished screams over standard-fare riffs, and it ends in an ominous synth drone section.

All in all, this is a “don’t fix what ain’t broken”-album, and you know what? That’s just fine with me. There’s a very tasteful use of creepy synths, the vocalist is pretty damn awesome, the guitarists have a very good sense of melody, the drummer is relentless, and it’s just very decent and promising black metal. Here’s to more Smrt.