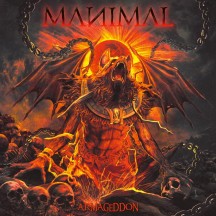 
Choo... Choo... this train is departing and there’s no time for stopping!

Wow, this was an incredibly nice surprise in 2021. It’s this type of power metal record that brightens my day. In a lot of ways, Armageddon reminds me of Warrior Path’s The Mad King, which came out earlier in 2021. I did a review for that one as well, and I remember gushing about the production a lot. It was bombastic and epic.

Armageddon is no different in terms of production. It’s power metal in its heaviest form: mighty sounding drums, brawny bass and stout guitars all blended together in a wonderful mix, exactly the type of production that I like for these kinds of albums. It perfectly suits (and even accentuates) the sometimes thrashy touch that is present on Armageddon.

Now, Armageddon is the first record I’ve ever heard from these guys. This resulted in me being pleasantly surprised by the vocals. These are the type of vocals that could shatter a piece of glass ten miles away. Insanely powerful and commanding. I loved every single second of them. The other band members are also delivering top-notch performances; they manage to keep up the same intensity as the vocals, and this results in an absolute thrill of a ride.

In terms of flow and pace, this album also does impress most of the time. If the band is like a powerful steam train and the songs are the train stations it passes through... Well, then the pace is comparable to the steam train thundering through every single station at full speed. Imagine Thomas the tank engine on crack. Great stuff!

Lyrics wise? It’s power metal... what do you exactly expect. 99% of the time it’s either completely bonkers or cheesy in all its varieties. In this case, it’s pretty average in terms of lyrics. Nothing too special or deep in terms of meaning to be found here, but luckily it’s not painfully cheesy either. It serves the music, but doesn’t elevate it; that’s the best way I can describe them.

Do I recommend Armageddon? I’m being silly here, of course I do. Power metal fans will have a great time with this one; this is the kind of record that shows how great the subgenre can be. Even for the folks that aren’t big into power metal, this might be one you’ll like anyway. It offers the epic flair you would expect from power metal, but in a very straightforward and effective way; it’s thoroughly enjoyable.