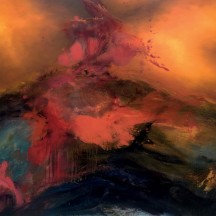 
In the end, I didn’t get to join the Sunn O))) reviewing club before 2021 was over, but better late than never. Now I get to have opinions about everyone’s favorite weird drone duoooo))).

I’ve been expanding my horizons to cover more and more of the productive and experimental specters of weird, esoteric, haunting, and sepulchral noise beloved by many of Metal Storm’s inner circle, staring with prolific Dutch madman Mories in 2020 (and not once but twice) and then The Body in 2021. Now I join the elite cadre of staffers who have covered Sunn O))). My experience with Sunn O))) is pretty minimal in spite of their reputation and my growing affection for more unconventional forms of music, but this did give me an excuse to dig out the old copies of Black One and Monoliths & Dimensions I bought years ago, just for the sake of having done a little bit of background research (not that that did much good in the face of the band’s evolution).

The EP described by that unwieldy title was hatched from Sunn O)))’s last two full-length studio albums, Life Metal and Pyroclasts, both 2019 releases on whose heels this live performance followed. I met those two albums with muted enjoyment, as did some more experienced fans, but hearing the buzz from a stage and the reverberations in real time adds a lot of weight and dimension to these recordings, and getting a new perspective on the pieces has allowed me to find some deeper enjoyment in the bright bombinations embodied therein. Consisting of three tracks, “Pyroclasts F,” “Pyroclasts C#,” and “Troubled Air,” Metta, Benevolence BBC 6Music: Live On The Invitation Of Mary Anne Hobbs reinterprets the musical themes from the parent studio albums and conducts them into new arrangements brought about after a tour cycle’s reflection. That duology, and this album by extension, deviates from the dark, demented drone that drew attention from heavy music fans years ago; they’re cheerier, simpler, and more affirmative, not so much the terrifying clatter of aforementioned early works as a warm and radiant wave of positive energy. The performance captured here feels very much like an afternoon spent lying in the sun, caressed by gently buzzing waves of ebbing and flowing feedback. It’s hardly as violent as pyroclastic flow and there’s little to call “metal,” but the themes of heat and vitality are boldly represented.

On “Pyroclasts F,” you can hear moments where the drone picks up steam, growing so restless amidst the vibrating chords of vital essence that it develops an urgent quality; nestled within layers of guitar and organ, intertwined with wordless vocals, the orange glow revs up like an extremely slow engine gradually injecting life into the crusts of earth around it. “Pyroclasts C#” follows up that energetic collage of sounds with something more solid, a stately and elegant drone held together by curious keyboard variations and shooting stars made of scratching sounds. This middle part of the performance warps less weirdly, building more on layered emanations. That approach leads directly into “Trouble Air,” which, true to its name, complicates the liberating light of the first half with mysterious mists and sinister turns; it is interesting that the dark-to-light transition achieved by Life Metal flowing into Pyroclasts is now reversed here, with the freer-spirited Pyroclasts tracks reeling back into the moodier and heavier Life Metal summary. The song becomes not only darker but more anxious, straining harder and harder against the limits of its direction even in its brighter moments. A trombone solo, not present on the album version, adds a whole new dimension of mournful and elephantine sobriety to the track’s steadily darkening tone. The trombone works surprisingly well, in fact, and is probably the highlight of the entire album; even though I prefer the lighter tone of the first two tracks, the interplay between the sinister string reverberations and the blurring echoes of brass is magnificent.

I’m glad to have this live release, whose title I’m not going to bother typing out again, not only because it spurred a return to Life Metal and Pyroclasts with more positive feelings, but because it demonstrates an evolution in that same style across even the few months following their release. I’m aware that some fans consider the last decade to have been an uneven one for Sunn O))), but this is a sign that there could well be some further evolution on the horizon.