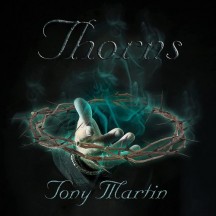 
Probably the most controversial moments in any major band's history are vocalist replacements. Black Sabbath's had quite a few. And despite having the second longest tenure as Black Sabbath's vocalist, Tony Martin is still among the most overlooked. Now he's got a new album out.

Out of all the Black Sabbath vocalist that have appeared on a record (since there's been quite a few, like Dave Walker or Ron Keel, who had short stints with no studio recordings), each of them had pretty strong careers outside of Black Sabbath. Ozzy Osbourne has become the "Prince Of Darkness", a reality TV star, and his popularity is arguably larger than even Sabbath's. Ronnie James Dio's stint in Rainbow and his solo work in Dio is pretty much essential listening for any metalhead. Ian Gillan's stint always felt more like "Hey, did you know that Deep Purple's vocalist did an album with Black Sabbath?". Glenn Hughes not only has a relatively successful solo career, but also each of his stints in Trapeze, Deep Purple, Black Country Communion, and The Dead Daisies have had some rock stardom. And then there's Tony Martin, who had a couple of solo records, some collabs with a guitarist, some guest vocals work, but something tells me that, out of all of these, it would be the hardest to name something that Tony has done outside of Black Sabbath without doing some research.

Thorns is only the third solo Tony Martin record. Other than three albums done in collaboration with guitarist Dario Mollo, the latest of which released in 2012, the previous solo album was 2005's Scream, an album that was heavier than his AOR solo debut in 1992. And that's Tony Martin's solo career. But despite his modest career and his often overlooked stint in Black Sabbath, albums like Tyr and Headless Cross had some fervent admirers. I guess you could name me among them. And the best thing about Thorns is that Martin's vocals have barely aged, despite the two-decades-and-then-some period in between this and his last appearance on a Sabbath record. So, for the most part, someone who's been a fan of those records will still find Martin's vocals intact and incredibly enjoyable here as well. He doesn't shy away from using any part of his range, and his presence is still pretty powerful.

Other than Martin's vocals, there's still a lot to appreciate about Thorns. Guitarist and songwriter Scott McClellan in no Tony Iommi, but does his damn hardest to match and extend the sound of Martin's Sabbath records to something with a more modern edge. That is felt both in the songwriting, with the riffing being a bit more beefy, but also in the production. Thorns has even less of an AOR feel than its predecessor, with everything from the brooding doomy "Nowhere To Fly", the choir-rich "Book Of Shadows", the groovy "Black Widow Angel", the ballad title-track, and the two acoustic songs "Crying Wolf" and "This Is Your Damnation" couldn't be more different from each other. And throughout it all, even if the riffing and the vocals often take center-stage, the bass is incredibly tasteful and has a pretty strong presence is songs like "Black Widow Angel". And though the songs aren't free of some cheesiness factor, and I could probably do without one or two of them, the overall quality here is pretty surprising by ex-Sabbath vocalist in 2022 standards.

I have a feeling that Thorns won't suddenly change the narrative and lift Tony Martin's career to unforeseen heights, but it solidifies him as an unsung hero worth more recognition. At least I had a better experience with this than the last time I reviewed an ex-Sabbath vocalist.

Written on 22.01.2022 by
RaduP
Doesn't matter that much to me if you agree with me, as long as you checked the album out.
More reviews by RaduP ››