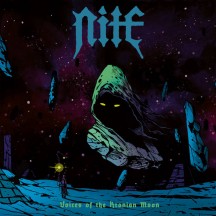 
Nite is the heavy metal band with the most ghoulish vocals.

It's quite a challenge when one aspect of a band's music is so much more unique than anything else. Especially since it's not like I can spend the entire review just talking about Nite's vocals, but it's hard for them not to overshadow everything else. And the vocals aren't that out-there by themselves, but it's the juxtaposition that really drives the point home. Blackened heavy metal isn't such a new thing, and depending on whether you consider Venom as such, it actually predates black metal itself. Blends of the two have had varying nuances from each, sometimes closer to speed or thrash metal, sometimes something closer to black 'n' roll, sometimes very gloomy. The weird thing though, is that Nite still sounds unique even when compared to this long lineage.

Most blackened heavy metal bands would have the black metal seep into the music itself. Make the heavy metal harsher and rawer. For Nite though, the black metal influence starts and stops with Van Labrakis' ghoulish vocals. And I call them "ghoulish" specifically because they're almost whispered, in the way you'd expect an undead to really be unable to properly fill their lungs for singing. I don't suspect that Labrakis has any lung problems, but his vocals sound so at odds with how you'd expect a heavy metal singer to sound like. And it's not like they don't fit, they follow the melodies and everything but the rotten tone is precisely on-point. But then again, remove that rotten tone and Nite's Voices Of The Kronian Moon is suddenly a much less interesting album. Hence why I had reservations about an aspect overshadowing the rest of the album.

The instrumental side is very melodic and moody, often sounding like closer to hard rock at times. If there's any modern band it reminds me of, it's Sanhedrin, in that it's so easy to listen to due to its use of familiar sounds, and obviously that would be the case if not for the vocals. By the end of Voices Of The Kronian Moon though, I can't imagine anyone not being at least a bit won over by their use. It's clear that Nite got chops and they can write some damn good songs. What sets Voices Of The Kronian Moon apart from Nite's debut from two years ago, was that they have a renewed self-editing skill, cutting away all the fat and coming up with an album that's almost ten minutes shorter, and all the better for it.

In the end, the vocals are the biggest upside and biggest downside of the record. Their uniqueness makes the album stand out, but their bizarreness makes it a bit harder to feel comfortable listening to the album, while their ghoulish tone isn't exactly helping a sound that is supposed to sound at least a bit catchy and anthemic. Simply put, Nite can't continue to thrive on contrast alone, but they also can't lose what makes them unique.

Written on 30.03.2022 by
RaduP
Doesn't matter that much to me if you agree with me, as long as you checked the album out.
More reviews by RaduP ››