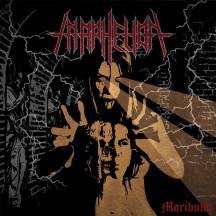 
So, the two guitarists of Necrophobic and the drummer of Cryptosis formed a new project and just released an album. “What does it sound like?”, you ask. Well, it sounds very much like Necrophobic.

In Aphelion is a melodic black metal band and the emphasis is on ‘melodic’ because the lead parts and the solos are truly stealing the show here. I do not want to take any credit away from the inspired drumming but, from the opening track, on which the keyboards play a spooky tune that is soon taken over by the guitar, to the epic closer “Requiem”, Moribund is very much a guitar-focused album. If you have a friend who’s into heavy metal but cannot handle the extreme stuff, even though they have tried, give them this and they will love it. The melodic and anthemic aspect of Moribund is very appreciative of the classic heavy metal teachings; hell, the leads on “Draugr” and “Sorrow, Fire & Hate” sound like Iron Maiden tried their hands on black metal.

Standout tracks? Well, “Let The Beast Run Wild” is a rabid beast of a song that runs faster and wilder than a wolf on nitrous. The bass line of “Luciferian Age” is love at first note. “This Night Seems Endless” is one of the greatest black metal ballads ever written, if there is such a thing as a ‘black metal ballad’. “Sorrow, Fire & Hate” is a bipolar masterpiece justifying its title by showing both an emotive and an aggressive character. “Requiem” is, after much thought and many replays, my personal favourite; its melody is fairly simple and its progression doesn’t have anything particularly complex about it but it gives me goosebumps from start to finish. According to vocalist/guitarist/bassist Sebastian Ramstedt, the song and the video “is dedicated to all our fallen brothers and sisters, and, in the end, it became a personal goodbye to L-G Petrov”.

For an album that clocks in at just under an hour, Moribund maintains momentum and never lets up. I am trying to find a filler here but I simply cannot. It baffles me how after the immense quality of the last two Necrophobic albums, we still get a shining melodic black metal jewel such as this. It is very close to the sound of Necrophobic to the point that someone may wonder why it had to be released under a different name. But I don’t complain. I mean, how could I complain when we have a melodic black metal album of the year contender in our hands?