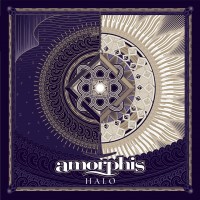 
A mediocre effort from a good band. Poorly composed, with little thought into what ideas to include and how long to dwell on them. A collection of B-sides that haven't made it on past records?

Shortly put, Amorphis's Halo lacks balance, with too many unconnected (by key perhaps, though they change it too often) themes thrown into the bunch. The themes don't seem to last long enough and are abandoned mid-flight for a new idea. It's a frustrating listen when a theme you have been about to unravel is lost for something else unconnected.

Take the opening theme from track one. It sort of develops into a guitar-sounding theme. Then comes the disappointment when an utterly unconnected part comes in. Take the Therion-like choir in the same track. It's a surprise to hear those, but how long does Amorphis dwell on it? The motif goes away as soon as it sounded out. There are many other examples of not doing justice to an otherwise good theme. In contrast, the themes that Amorphis chooses to reprise are typical Amorphis grade and nothing short of unmemorable.

The new elements they include aren't exactly new either; instead, they are reminiscent of 1970s-inspired prog: mellotron, cliched high's eq'ed, compressed vocals (which sound like phone speaker with little-to-no bass), Opeth-esque arpeggios etc. Whenever a band does a teaser of new ideas on their albums, I keep asking myself if they do so for the sake of testing their fans or genuinely want those.

Plagued by too many key changes in one song, Halo suffers from overuse of very cliched harmonic minor scale runs several times. This is the thing you do when good musicians, progressively inclined, can't come up with a better way to connect two parts (speaking as an amateur that recognises some elements here and there), but wouldn't we expect more from a band like Amorphis? Nothing on this album feels memorable. Overall, it feels like a commercial effort suited to fit the tastes of progressive music fans looking to hear the usual scale runs, the usual key changes. I have enjoyed their previous albums, some less some more, but this is the epitome of what is wrong with cliched progressive music. Queen Of Time was more balanced and less cliched.

Pursuing this direction runs the risk of being put on the spot and cliches pointed out. A great commercial progressive album, its fans will enjoy it, but haven't we heard all this before on better composed efforts? To me, Halo just feels like this is their bet where the money is nowadays. Perhaps in an era of social media and a plague of short attention spans, one way to get their listener's wallets is to pursue incessant key theme changes, coupled with other progressive cliches? Sprinkle that with a few new ideas and make sure not to dwell on any? I wonder if it will really earn Amorphis more spins (or rather track plays) in the streaming services.

I don't suppose this album will enjoy too many spins after the novelty runs out. It feels a bit like a disposable effort, perhaps in fitting with the times. Or assuming it's catered to a wealthier prog audience that enjoys a poorly planned composition, disguised as a progressive album? The thinking that goes, we'll now pursue more prog since prog pays more (whether collectors, fans or concert goers)? Or maybe I'm wrong, this is the best effort you get when people don't rehearse too much (or not at all, and then do poor composition in the studio) to filter out ideas that just don't work in the long run on a record? Whilst a novel band can be given a laxer review, in view of a developing musicianship, skillset, etc., a seasoned band in the league of Amorphis needs its bar to remain high and the efforts need to be valued on true merit.

I personally admire bands that have the guts to disband, or cease to release new albums, or its members go on to form new projects when they have nothing new to offer or their music isn't genuine but merely commercially driven. The same can be said of bands with label commitments like a release schedule, which runs on the opposite end of artistry. Releasing albums fairly regularly as a way to earn a living for a band like Amorphis may work but seems a bit dubious to me; on the one hand, you may have talent, but on the other, you may get stuck in uninspired craftsmanship, which may lead one to release it quickly without the initial flair in their song writing that bands start off with. It well be where Amorphis are with this album these days.

Despite its professional production, this album earns a 4.5 (slightly better than BAD) from me, in recognition of their potential to do far more, not merely release a rushed hodge-podge of unrehearsed ideas: Halo.