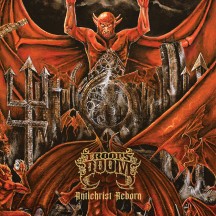 
I like Sepultura. That's about as uncontroversial as a statement as you could make here. I might we well just state that I breathe air and the sky is blue. So let me try again. I also don't think most of the Derrick Green albums are that bad, and I quite enjoy some of them. But even more relevant for the purposes of this review, I think Morbid Visions, Sepultura's 1986 debut full length, is waaay overlooked. Their following albums certainly were better albums that paved a way from death thrash to groove thrash, but the almost first wave black metal-ish sounds rarely get brought up in discussions on early extreme metal.

Before Andreas Kisser joined the band, Jairo "Tormentor" was Sepultura's guitarist, who only played on the aforementioned debut and the Bestial Devastation EP. And, as someone who sees those as overlooked, I was especially excited when Jairo formed a new band specifically for a new take on that sound, with a band name taken from the most famous song of that era of the band. Obviously Troops Of Doom in 2022 don't sound exactly like Sepultura did in 1986, since the early black metal element is all but gone, and the production quality is far from that rawness, but it scratches quite a nice death thrash itch.

Other than the obvious, Sepultura comparisons, for which I'd also add that this sounds more akin to Beneath The Remains than the actual early era that Tormentor was part of, The Troops Of Doom also remind of Slayer, Possessed, and Kreator. So it's thrash metal that, while clearly rooted in thrash, still has a pretty audible death metal presence, though not enough to tip the scales. Add bits of groove, and you have a pretty rewarding serving of a pretty established sound. Though I wasn't familiar with any of the other members, every performance is decent at least, with me being especially surprised that vocalist/bassist Alex Kafer has barely had any vocal credits in other bands despite being a pretty active musician.

Antichrist Reborn follows a series of two EPs, so the band had some time to polish their sound, also making this the first release of theirs not to have any covers, of Sepultura songs or otherwise, and the guest spot of Ratos De Porão's João Gordo is a pretty nice touch. Like with most albums of this kind, I'm glad that it's extremely consistent, even if it might not do anything new or especially exciting. Keeping it at less than 40 minutes of runtime is a good move. I don't really expect The Troops Of Doom to blow my socks off or disappoint me terribly with any of their future releases, so this probably also means this is the first and last time I'll review their albums. Maybe I'm wrong, but chances are we have another consistent band in our hands.

Written on 19.04.2022 by
RaduP
Doesn't matter that much to me if you agree with me, as long as you checked the album out.
More reviews by RaduP ››