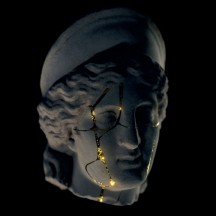 
As much as their name sounds like Oh Dae-Su when said aloud, Au-Dessus are sadly not an Oldboy-themed metal band.

Alongside the likes of Erdve, Sinamort and Inquisitor, Au-Dessus are a product of the surprisingly fertile Lithuanian metal scene. Making waves with their 2015 self-titled debut EP, Au-Dessus solidified that promise with their excellent first full-length record, End Of Chapter. However, things have been quiet since the release of that record in 2017; an impressive set at the 2018 edition of Hellfest aside, Au-Dessus hadn’t appeared on my radar for a few years. Five years on from End Of Chapter, Au-Dessus return with Mend, a 5-song EP (one song written per year, presumably).

For those unacquainted with the band, Au-Dessus fall under the post-black umbrella; the bands that shared the billing for their first post-Covid gig, Regarde Les Hommes Tomber and The Great Old Ones, offer a decent indication of how the group sound. The band’s initial releases featured a potent concoction of aggression, atmosphere and subtle melody, as sustained sections of infernal blasting contrasted with mid-tempo pondering, which, while being predominantly bleak and built around sinister blackened riffs, could feature anything from melodic guitar leads to ominous chanting as extra flavours. The years away have not drastically changed Au-Dessus, but Mend does diverge to some extent from its predecessors.

Perhaps the most striking thing to me about this release is that, while End Of Chapter featured the various aspects of Au-Dessus all featured together in most songs, Mend instead slowly evolves from intense and grotesque to atmospheric and melodic across its entire runtime. “Negation I” is an ominous ambient introduction to the EP, but “Negation II” instantly takes the record to full intensity and offers almost no let-off, with the entirety of its range covering ‘fast and vicious’ all the way to ‘a bit slower but equally vicious’. With only slightly more variation, “Lethargy” follows pretty much the same template.

Now, Au-Dessus are a very solid black metal band; these two tracks have a hellish production that means that they make a solid impact, and there’s some tasty riffs in the more mid-paced sections. Still, in the past, this was just one piece of a wider puzzle when it came to their sound, and it would be unfortunate for them to narrow their scope to focus solely on this aggression. With “Epiphany”, Au-Dessus start to have something of an epiphany; while mostly sticking to what has already come on the EP (albeit with much more focus on mid-tempo riffs), they weave in some tasteful guitar leads later on that add a fresh dimension to the record. This serves as a predule to “Alienation”, a song that reframes their sound tonally; there’s blasts and tremolo, but the dissonance is toned down and the chord choices offer more clarity and melody, allowing an evocative melancholic energy to grow across its runtime.

Mend effectively confirms that Au-Dessus have not forgotten how to write their compelling brand of post-black across the past 5 years; the way in which it is structured is new, but I imagine a lot of that comes down to the fact that this isn’t a full-length record, and this reduced runtime provides an opportunity to structure dynamics and progression across a whole album rather than on a song-by-song basis. I’m looking forward to their eventual sophomore LP, but for now, Mend is a respectable comeback from a group that had previously seemed to have disappeared almost as quickly as they’d emerged.

Written on 30.04.2022 by
musclassia
Hey chief let's talk why not
More reviews by musclassia ››