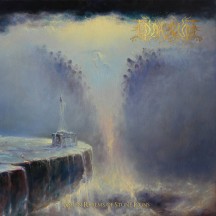 
01. Introspection I
02. Condemned To A Life Of Grief
03. In This Empty Space
04. Introspection II
05. Where No Warmth Is Found [feat. Marissa Godinez]
06. As Black Forms From Grey
07. Awake Into Eternal Slumber [feat. Matt Warner]


Tómarúm, according to a quick online search, is an Icelandic word meaning a vacuum or void. Having listened to Ash In Realms Of Stone Icons, Tómarúm’s music couldn’t sound less empty or voidlike.

Ash In Realms Of Stone Icons is the debut record from Atlanta’s Tómarúm, who were a two-piece driven by guitarist-vocalists Kyle Walburn and Brandon Iacovella during the creation of this record (although the band has now been fleshed out into a five-piece). From the Nordic name, the album and song titles, and the Mariusz Lewandowski artwork, you would probably guess that this was a black metal album of some form without having read anything else about the band, and if so, you would be right. However, this isn’t a bleak, nihilistic dissonant or atmospheric black metal record; Tómarúm approach black metal from a more progressive yet explosive angle.

Ash In Realms Of Stone Icons takes a bit of time to get going; with a 2-minute introductory instrumental (“Introspection I”) that evolves from humble acoustic beginnings to an onslaught of tech-death/black metal, you’d think Tómarúm would be ready to launch by the time “Condemned To A Life Of Grief” starts, but there’s a further three-minute instrumental introduction before the vocals arrive in this song. It’s arguably too long of a lead-in for the album, but it does give an opportunity to pick up on some of the features that make Tómarúm quite distinctive.

When I just mentioned tech-death, there are parts of this album that fall firmly into tech-/prog-death territory, but even during the black metal sections that predominantly comprise Ash In Realms Of Stone Icons, the bass on this album is playing arrangements most people would more typically link with tech-death. To accentuate this, the fretless bass, which is performed by session musician Arran McSporran, is placed very high in the mix; I can’t think of many black metal albums where the bass consistently draws so much attention. In terms of what’s accompanying it, Tómarúm play more of a melodic black metal style, with some typically cheesy keyboards (as well as some classier-sounding piano bits) to go with it.

In terms of intensity, the band initially dabble with more atmospheric mid-tempo stretches on this song, but full-pelt blasting dominates for much of this album; “Condemned To A Life Of Grief” features multi-minute stretches of non-stop blasting, which can get a little much. However, to take a break from just relentless sharp-edged tremolo, Tómarúm also dig deeper into the tech-death avenue with some more complex riffs, but more so by unleashing some scene-stealing fast, technical, melodic solos. There’s one in the middle of the track that does a good job of breaking up the relentless attack otherwise going on around it, but it’s the one at the end, during a sequence where the tone is turning a bit darker and more evocative, that caps off the song really nicely. The solos are very much on point during Ash In Realms Of Stone Icons; the highlight is about two-thirds of the way into “As Black Forms From Grey”, a hypermelodic shred above a bludgeoning death metal percussive base that feels like it would be more at home on a Fallujah record than a black metal one.

This solo is then followed up by another element that expands the sonic palette of this album: clean vocals. The stirring harmonized deep male cleans above a ballistic double bass drum-heavy assault, in tandem with the exhilarating solos either side, make for such a rousing climax to this track. It’s moments like this that make the second half of the tracklist, following the “Introspection II” acoustic guitar/keyboard interlude, grab the attention more than the first half. “Condemned To A Life Of Grief” and “In This Empty Space” are exciting songs, but apart from the frantic solos they throw at you, they are a bit relentless in the full-on blackened blasting attack they persist with for the large majority of their runtimes without much else to spice things up. In contrast, the incorporation of clean vocals at opportune moments on the last three songs, as well as the slower introduction into and more tech-death-oriented instrumentation of “Where No Warmth Is Found”, allow them to vary the tone a bit to their betterment.

The one thing I feel Tómarúm can work on going forwards from this very impressive debut is having a bit more variety in intensity and tone across the album; so much of the drumming is turned-up-to-11 blasting or double bass rolling, and a lot of the riffing is similarly on-the-limit, which is a lot to handle across a full hour. There are brief breaks in songs where everything fades away to synths and/or acoustic guitar, but that’s if anything going too far the other way; there is space between these extremes that I think Tómarúm would benefit from exploring. I believe this mostly because the closing track, “Awake In Eternal Slumber”, does explore this space, and ends up as the best track on Ash In Realms Of Stone Icons. With a ballistic but triumphantly melodic introduction, this 15-minute epic does eventually (think 6 minutes) pull back a bit, the drums slowing down to heighten the importance of a grandstand riff. From there, “Awake In Eternal Slumber” features more of an ebb and flow between full-blast and slower moments, culminating in an unexpected but thoroughly euphoric blackgaze-inspired ending.

There was quite a bubbling of hype prior to the release of Ash In Realms Of Stone Icons due to Tómarúm’s Wounds Ever Expanding EP, and this debut full-length very much delivers. As already mentioned, I do hope that as the band’s songwriting matures, they slightly expand the range of their intensity to allow those ‘maximum aggression’ parts to make more of an impact, and it’ll be interesting to see how things progress with their newly assembled line-up. However, with this debut, Tómarúm have already developed a tech-death/progressive black metal style that is clearly their own and very fruitful.

Written on 14.05.2022 by
musclassia
Hey chief let's talk why not
More reviews by musclassia ››