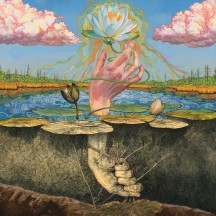 
Out of all the metal subgenres out there, one that really works great as being very bright is prog metal.

And I don't really mean that Moon Tooth is very bright, or that other subgenres like post-metal or metalgaze or heavy metal or alt metal don't have their fair share of brightness. But what do I mean by "bright". Well, if I say that music is "dark", then there's not really that much need for further explanations, but it feels like its opposite would require some. Let's just say that the overall vibe I get from Phototroph lies more within the positive emotions rather than the anger or melancholia or despair one would get from "dark music". It's not like Moon Tooth's Crux, their 2019 that I discovered them through, was much darker, but the difference between the two is significant enough to notice.

Moon Tooth continues to be very hooky even if their music brings complexity to place it within the prog metal world, but here the hooks seem a bit more passed through a pop filter, not really pop in the sense that it's necessarily pop, but some of the post-grunge, hard rock, alt metal leanings that it has do have a radio rock leaning that brings a newfound accessibility that contrasts Moon Tooth's proggier leanings. With a vocalist that's impossible to ignore, one that sounds like Greg Puciato passed through a southern stoner rock filter, and with all of its radio rock leanings, there's always the chance that it would hit a pitfall where it would sound too much like the dated tropes of the 2000, but instead it sounds like a revitalized and improved version of that sound.

The balance between the straight-forward rock and the prog metal is a bit more skewed towards the former this time around, so I'm not really sure whether I could still call Moon Tooth a prog metal band first and foremost, but the prog is still very present. There's some heavier explosions of riffs which still retain a bit of a darker edge that feel surprisingly crunchy when contrasted with the rest of the sounds of the record. There's a lot of versatility at play more than just in the "prog meets radio rock" sense, and not just in how many nuances of each style are tackled, but in how well the whole thing flows despite its contrasts and the chops that all players clearly have are used in a way that suits the songwriting. It's a bit of a shame that the mixing is quite bricked, that keeps Phototroph from having the full impact of its catchiness and creativity.

Curious to see how the band gets to play around with these sounds the next time around, the mix is, literally and figuratively, close to where it may really hit.

Written on 19.05.2022 by
RaduP
Doesn't matter that much to me if you agree with me, as long as you checked the album out.
More reviews by RaduP ››