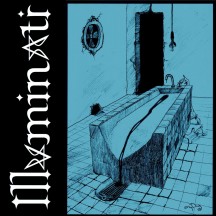 
"I went, sir, I showed them everything that could be done, they said they wanted a new world, but where can I give them a new world, that's why I called you all here to create this world again, together. Someone is missing? We should all be here. Hey, but who was sitting in that empty place? Ah, the devil. Didn't you bring him too? The devil? Where is the devil?"

It was pretty early in my journey as a metalhead that I discovered Illuminati. I mean, relatively, since I had already been into rock and metal music for quite a few years before hand, but I was more in a "born in the wrong generation" mindset for too much of it. A lot of it changed when I discovered Metal Storm, and it was somewhere around that time that I was getting more interested in discovering more music from my country, since, at the time, I pretty much mostly knew Bucovina, Cargo, and Trooper. I would eventually find others through this website, like Negură Bunget and Dordeduh, Descend Into Despair, Dirty Shirt, Methadone Skies, and a whole slew of others. In the meantime I have done my part in giving back to Romanian metal on Metal Storm, whether through reviews, interviews, articles, and outsourcing reviews. And this isn't even the first time I reviewed Romanian old-school tech death. But Illuminati is still one band I was hoping to return the favor to.

I was amazed hearing The Core all those years ago. I was baffled how this Romanian band came out of nowhere and got all those guests on their debut album. And how they managed to nail the sound I had previously mostly heard on Death's latter albums. I mean, you've got Pestilence's Patrick Mameli, Nocturnus' Mike Browning, Martyr's Daniel Mongrain, Atheist's Kelly Shaefer and Tony Choy, Cynic's Tymon Kruidenier, and Gorguts' Luc Lemay, all on a single album. Ironically, I was early enough in my journey as a metalhead that I was only familiar with half of these, with The Core acting as a springboard for me discovering the others, and by extension getting even more into that era of tech/prog death.

The trio of Illuminati are impressive even by themselves, since the guests (sans Tony Choy) only provide the vocals. And songwriting-wise, The Core absolutely nails the tech/prog death sound, so that none of the guests feel out of place on their spots, with the influence of their original bands feeling very much alive. Though it also doesn't feel like Illuminati went out of their way to try and write a rehashed Pestilence song and a rehashed Nocturnus song and so on. Despite how varied the guests and their original bands are even within the relatively small 90s prog death niche, The Core doesn't feel disjointed. Part of it is due to the way the album is structured, with one normal death metal song with guest(s) from a band, followed by an interlude.

Speaking of the interludes, some of them contain poetry, or rather something closer to theater, reminding me of Furia's latest failed experiment, while some are purely instrumental, acting as palette cleansers exploring sound collage, electronica, jazz fusion, and the like. I don't necessarily enjoy all the theater parts, especially the ad libs from the other "actors", nor am I sure how a distorted romance song and an echo-chocked performance of a man begging add to the album's themes, but the more substantial ones I have translated here for your reading pleasure.

"And then I thought, even if we bring diseases and carry these pink tails that are long as we are behind us, we know how to strategically place them in their world in different corners of the cities where they reveal the deepest secrets and the most secret strategies while they consider us unworthy of belonging to their world from the surface, we have more light on their activity, on the infrastructure of the cages they face. That's right, they don't realize that sewer pipes are actually information routes for us. They know certain things in secret circles, but we get tips from everywhere. What their vanity makes out of them!"

In the end, what I enjoyed most about The Core is not necessarily the star-studded cast, even if that's definitely the most impressive element and all the guests deliver stellar performances, but it is how creative Illuminati are in using their amazing chops to create music that pays tribute to an era without rehashing it too much. And in a country where similar bands like Taine sound a bit too much like a Death clone, it was the kind of album that really should've had more of an impact. The album's ten years anniversary is getting terrifyingly close, and I was considering reviewing this for that occasion, but more than anything I was hoping I'd get to review the follow-up. Facebook posts indicate that there is an album in works, one even more ambitious than this one, but the long wait is getting me quite anxious.

So instead, I'm reviewing this as my 600th review for the website, in hopes that I can give this band at least a bit of what it has given me.

Written on 12.06.2022 by
RaduP
Doesn't matter that much to me if you agree with me, as long as you checked the album out.
More reviews by RaduP ››