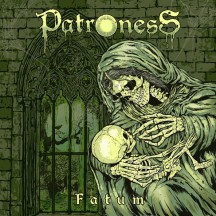 
“Geez musclassia, you write a lot of reviews, are you not worried about spreading yourself too thinly?”, I may hear you say. In response, I’ll say “no need to patroness – wait, I mean patronise – me, I know what I’m doing; there’s just so many albums coming out that I want to shine a light on, such as Fatum from Patronise – wait, now I mean Patroness.”

I feel like this album in particular could benefit from me ‘getting the word’ out to a few people, because you’ll be hard-pressed to find much else about it online; I came across it in the ‘new releases’ queue on Metal Storm, but haven’t seen anywhere else highlight it, and by searching online, I’ve failed to find any reviews, any news posts, barely any information on the band at all (hence my resorting to a rambling hypothetical discussion and ridiculous pun for the introduction to this review). Hopefully it’ll only be a matter of time before this changes, and the Belgians start receiving the attention that some of their compatriots dabbling in this sphere of metal have begun to accrue.

“What sphere of metal is that?”, I hear you say, and the answer isn’t particularly simple. I guess if you were looking for as brief a catch-all as you could find, perhaps ‘post-black’ or ‘blackened sludge’ might work, but I’m not sure how representative either of those terms are. There’s black metal and sludge metal fairly obviously in the mix on Fatum, the band’s debut record, but there’s also some doom, gothic, death and post-metal to be found here, with the outcome nebulously familiar without inspiring consistent comparisons to any one band in particular, which is a great position for an up-and-coming band to find themselves in.

Unsurprisingly, one isn’t going to encounter all those styles in one song; Fatum morphs and evolves across its runtime. Early on, there’s more of a focus on riffy blackened metal, from the chunky blackened death riff that kicks off “Undeceive” to the more atmospheric bridges within this same track. However, by the next song there’s already a change of tack, as “The Art Of Being (Nothing)” features the first display of the clean vocals that are used semi-regularly across the album (in terms of the tone of this singing, I’m struggling to think of a better comparison than Glenn Danzig on a song like “Mother”, except with a darker intensity). The doomy beginning of this song gives a brief pause before the black/death intensity returns for a gnarly second half, but those cleaner sounds are expanded upon in “Seclusion”, where gothic doom takes centre stage for the bulk of the track.

Fatum doesn’t have a linear progression from ‘extreme out the blocks, and then progressively cleaner’, however; if anything, it’s more of a U-shaped curve, with the middle stretch of “Seclusion” through to “Atonement” focusing more on softer sounds than the songs situated at either end of the tracklist. Still, there’s exploration of intensities within most songs; with all of them over 5 minutes in length, there’s space to do so, such that a song that wallows in the way “Foreshadow Oblivion” does at times can still attack with harsher black metal. The songs that stand out the most are those that exploit this range effectively; the pick of the bunch to me is “Atonement”, which introduces a clean guitar motif early on that sounds great played with clean tones, but sounds arguably even better later when twisted into thick distortion and powered by rampant energetic drumming.

With these fluctuations in style, there is a danger of spreading oneself thinly and failing to write really impactful interpretations of each style, but I don’t think that’s really an issue on Fatum. Perhaps the closest I find myself to thinking this is the back-to-back of the ending of “Crows Upon The Throne”, a decent but unremarkable death metal climax, followed by the introduction to the title track and its unconvincing tremolo-and-blast black/death onslaught; Patroness can write some killer extreme riffs, as evidenced right from the outset with “Undeceive”, but “Fatum” doesn’t quite live up to this, threatening to finish off the album in underwhelming fashion. However, the song changes direction midway through, like many on the record, and the emphatic blackened doom outro to the track thankfully ensures Fatum ends on a strong note.

There’s plenty of variety, ideas, and solid songwriting and song structuring in the arsenal of Patroness, based on the evidence that Fatum offers; if they keep this level up going forwards, hopefully more people will come to recognize their talents.

Written on 12.06.2022 by
musclassia
Hey chief let's talk why not
More reviews by musclassia ››